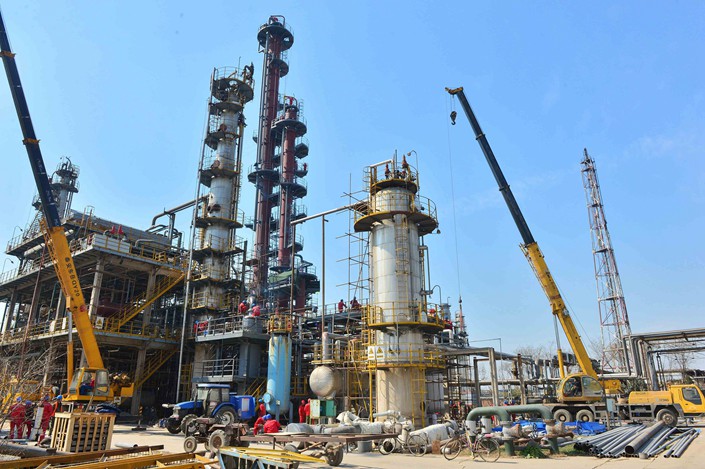 State-owned petrochemicals giant China Petroleum and Chemical Corp. (Sinopec) will team up with a consortium to revive plans for a major petrochemicals plant in the tar-rich central Canadian province of Alberta.

The project is worth Can$8.5 billion ($6.5 billion), according to domestic media reports.

While the plant’s ownership structure is yet to be finalized and the plan itself is still subject to regulatory approval, it will be capable of refining around 167,000 barrels per day of bitumen, a type of low-grade crude oil. The gasoline, jet fuel, diesel and chemicals it produces will primarily go to the U.S market, but the plant will also supply Asian markets via transport facilities, which will take products to the coast, according to the statement.

This is a prudent move by Sinopec as it will allow the company to apply its refining expertise to bitumen produced by Alberta’s Suncrude Oilsands, in which it has a stake, said Oceana Zhou, a senior oil industry analyst at S&P Global Platts.

“Oil sand produces diluted bitumen, the value of which is usually lower than other feedstocks. It makes more sense to process the barrels locally than to ship them elsewhere for refining. As China’s refining capacity is in surplus, it makes sense for the company to invest in refineries that are overseas and close to resources,” Zhou said.

Alberta’s First Nation groups, which represent around 117,000 people according to the last census, saw their plans for a refinery shelved in 2012 when the Alberta provincial government deemed the project too risky for taxpayers to foot the bill. While unconfirmed, it is possible that Sinopec and CSCEC will gain access to funds through China’s policy banks.

China overtook the U.S. to become the world’s biggest consumer of oil last year, according to the U.S. Energy Information Agency, and the country’s major state-owned enterprises have long been tempted to invest in Canada’s vast energy potential. However, Canadian governments have tended to be suspicious of Chinese state-owned firms, and volatile market prices have hampered mooted projects. In September 2017, state-owned oil giant China National Offshore Oil Corp., walked away from a proposed $20 billion liquefied natural gas project in Canada’s westernmost province of British Columbia as global energy prices fell.

Chinese companies retain a strong interest in the Canadian market, particularly as investment could boost goodwill between the countries as the Canadian government looks to improved exports to Asia as a counterbalance to trade tussles with the Trump administration south of the border, analysts say.

While a lack of pipeline infrastructure between Canada’s west coast and inland oil-rich Alberta have limited the potential of the trans-Pacific oil trade, the current government is pushing to develop the controversial $3.5 billion Trans Mountain project to triple oil flows. While plans continue to face legal hurdles and environmental objections, the government looks set to push the trade westward.

However, Sinopec’s new project is likely to focus on sales to the Americas, rather than on exporting back to China, Zhou said. “China is more or less self-sufficient and Chinese companies’ overseas production — crude, gas or products — is for international trading or within the original country for better economic sense,” she said.