Investment Firm Founder Imprisoned for Life for Ripping Off Investors 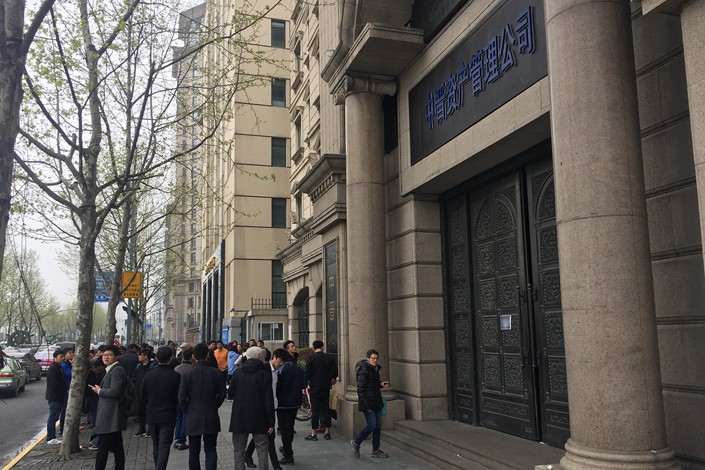 The offices of Guotai subsidiary Zhongjin Capital Management in Shanghai's exclusive Bund area were shuttered on April 7, 2016, shortly after it was revealed police were investigating Guotai's founder. Photo: VCG

The founder of a Shanghai-based wealth management company known for keeping a peacock in his luxury apartment has been sentenced to life in prison for his role in bilking investors out of 4.8 billion yuan ($701 million).

The court found that Guotai and three of its subsidiaries, which all operated without a proper banking license or investment expertise, had illegally raised billions of yuan from the public by selling investments that promised unrealistically high returns, only to squander the money on Xu and other executives, according to the verdict.

Police began investigating Guotai and its subsidiaries, including Zhongjin Capital Management Co. Ltd., on April 5, 2016, shortly after China kicked off a campaign against fundraising scams late the previous year. That campaign was sparked by the downfall of now-infamous Ezubao, then the country’s biggest online peer-to-peer lending platform. Investigators later determined that Ezubao had swindled about 900,000 investors out of more than 50 billion yuan by promising high returns in what turned out to be a Ponzi scheme.

By the time Guotai fell under investigation, the 3-year-old company had illegally raised more than 40 billion yuan from 12,000 investors, 4.8 billion yuan of which is still owed to investors, according to the court.

Xu and other executives ended up squandering most of that money, spending it on high staff commissions, luxury cars, expensive trips and advertising, the court said in its verdict. Among the extravagances, investigators had found that Xu had raised a peacock in his apartment at Tomson Riviera, a well-known luxury riverside apartment complex, according to the Shanghai police.

Guotai’s illegal fundraising came to light after police detained Xu at the airport in April 2016. The company had expanded quickly by registering more than 220 entities to raise money that it claimed would be invested in private equity deals, according to the police.

Three days after police began their investigation, Caixin visited the offices of some of those entities and found them abandoned.

Most of the products sold by Guotai’s subsidiary Zhongjin required an investment of at least 50,000 yuan. These investments offered expected annualized returns ranging from 4% to 14%. The products had maturities ranging from one day to one year, during which investors could not get their money back. Investors said they mainly bought products based on the recommendations of Zhongjin’s staff.

The imprisonment of the man behind the scam is cold comfort to many of Zhongjin’s investors. The court said that some assets have been recovered, including cash, property, automobiles and stocks. However, investors cannot be repaid until authorities finish the final accounting of the recovered assets, the court said.

Based on similar cases, investors are unlikely to get all their money back. Some of Zhongjin’s investors told Caixin that they haven’t been notified about the recovery process, nor have they received their money.