By Mo Yelin and Hou Qijiang 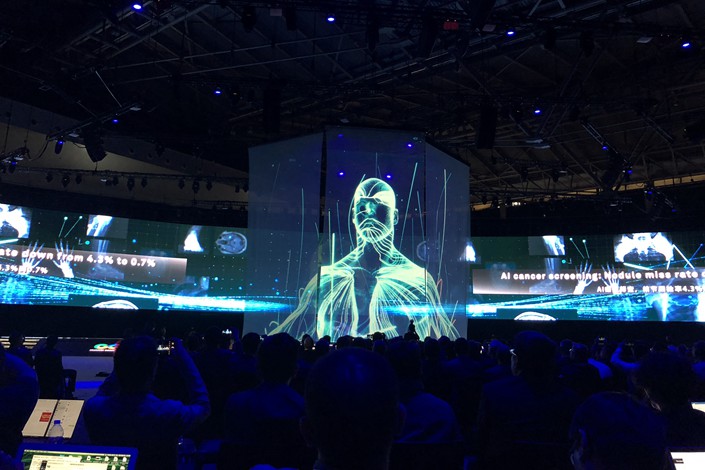 Huawei Technologies Co. Ltd. on Wednesday unveiled two new artificial intelligence (AI) chips, ramping up its push to enter a high-margin business that is dominated by Western peers such as Qualcomm Inc. and Nvidia Corp.

The new data processing chips — the Ascend 910 and Ascend 310 — will start delivery by the second quarter of 2019, the company said (link in Chinese). The Ascend 910 has the “greatest computing density in a single chip,” making it far speedier than rival products from Nvidia and Google, according to Eric Xu, Huawei’s rotating chairman.

The microchips are aimed at data centers, facilitating a wider application of AI technologies. Xu told reporters that his company will sell a full set of packages based on the chips to third parties, rather than just the chips alone.

Huawei’s interest in microchips comes as the Chinese government calls on companies to develop such homegrown high-end technologies. China is still heavily dependent on foreign manufacturers for such chips and other high-tech components. That fact became apparent earlier this year after Huawei rival ZTE Corp. nearly shut down after being cut off from its American suppliers for violating U.S. sanctions.

Huawei has also encountered its own problems recently, as it meets with resistance in the West from some countries concerned that its core networking equipment and smartphones could pose a national security risk. In one of the latest cases, Australia in August banned the use of equipment from Huawei, ZTE and other Chinese manufacturers in the new 5G telecom networks now being built in the country.

Huawei late last year unveiled its first chip, the Kirin 970. It is mainly used in its own mobile phones.

Ramping up chip design is also part of Huawei’s broader plan to increase its enterprise business, which only accounted for 9% of its total revenue last year. On Wednesday, Huawei unveiled a series of products tied to its cloud computing services, as it competes with players like Alibaba Group Holding Ltd. and foreign ones like Amazon.com Inc.