By Huang Kaixi and Ke Dawei 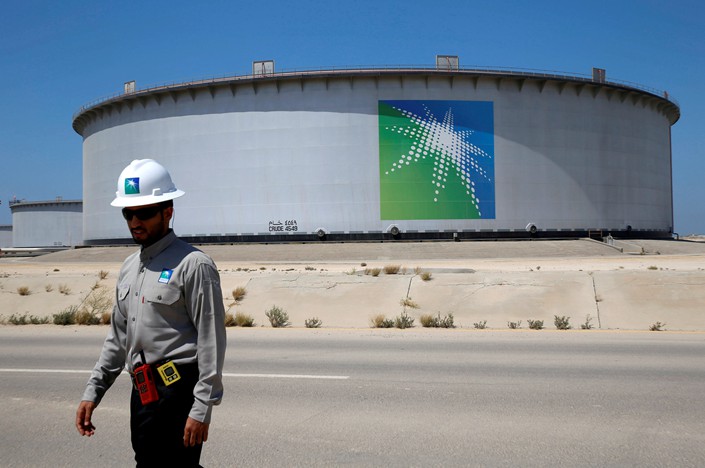 An employee of the Saudi Arabian Oil Co. walks near an oil tank at the company’s Ras Tanura oil refinery and oil terminal in Saudi Arabia on May 21. Photo: VCG

China’s independent refineries have long faced an uncertain existence, operating in the shadows of their giant state-owned cousins. But one has received a major vote of confidence with the backing of global giant Saudi Arabian Oil Co. (Saudi Aramco), which announced a major new investment in East China’s Zhejiang province on Thursday.

Saudi Aramco has signed a memorandum of understanding to invest in a planned major petrochemical complex near the city of Zhoushan, city officials said at a signing ceremony announcing the deal.

Aramco will take over the 9% stake currently owned by the Zhoushan government in Zhejiang Petrochemical Co. Ltd., the private refiner developing the project, Caixin learned from Abdulaziz M. Al-Judaimi, Saudi Aramco’s senior vice president. While the value of the deal has not yet been revealed, a 9% stake would correspond to about 2.14 billion yuan ($309.0 million), Caixin calculated.

The refinery will be capable of processing 40 million tons of crude oil a year, which experts say would make it China’s biggest private refinery by some distance. The project will involve a total investment of $24.9 billion over the next two years. Crude oil storage and transportation will also be developed at the site.

“Saudi Aramco can provide the petrochemical products needed by China in terms of refining and chemical integration,” Al-Judaimi said. “Saudi Arabia is constantly investing in enterprises in China to meet China’s changing energy needs.” Aramco has been China’s biggest oil supplier since 2006, he added.

The deal is a milestone for China’s independent “teapot refiners” — producers that have managed to develop on the fringes of a domestic industry dominated by state-owned giants such as China National Petroleum Corp. and PetroChina Company Ltd. While mostly sidelined by a lack of government support, teapots have grown rapidly in the last few years and now account for around a fifth of China’s crude oil imports, leading to an increasing interest on international markets.

It also marks significant progress for Saudi Arabia, which has been looking to woo China while Beijing has grown increasingly close to one of the kingdom’s biggest energy rivals, Russia. In June, Saudi Aramco agreed to supply the Hengli Petrochemical Co. Ltd. refinery in the northeastern city of Dalian with around 20 million tons of crude oil a year.