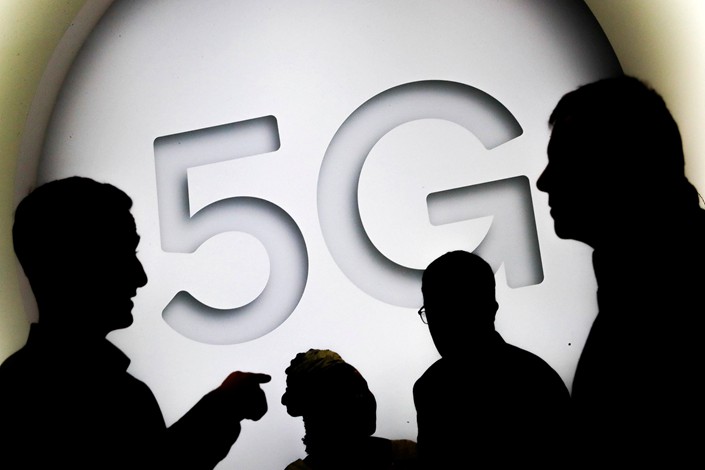 A “5G” sign is seen at the Mobile World Congress in Barcelona, Spain, on Feb. 28. Photo: IC

* A report from a news outlet affiliated with China’s telecommunications regulator said three of four 5G licenses to be awarded will go to the current big three wireless carriers, while a fourth could go to China Broadcasting Network Co.

(Beijing) — China may be weighing a 5G wireless license for a new fourth carrier, a move that could require a huge new investment and force such a carrier to focus on niche markets to avoid direct competition with the three incumbent operators.

But analysts questioned the wisdom of awarding a fourth 5G license in a market that is already well-served by the three big carriers, and where the expense of building a fourth network would be substantial.

China has been racing to develop its 5G development after trailing its foreign counterparts in previous wireless standards through the current 4G system. The country intends to start testing commercial-quality 5G wireless services next year and could roll out national commercial networks in 2020.

A report from a news outlet (link in Chinese) affiliated with China’s telecommunications regulator said China is set to announce the availability of 5G spectrum allocations by the end of the month, and that four 5G licenses could be awarded by the beginning of next year. Three of those will go to the current big three wireless carriers, while a fourth could go to China Broadcasting Network Co., a telecommunications company formed in 2014 by combining many of China’s regional cable TV operators.

China Broadcasting Network was originally set up to run cable networks but was granted a license to operate internet and communications services for consumers in 2016.

Experts greeted the report with skepticism.

“The Chinese mobile market is the biggest on the planet, and the investment required for a new entrant would be truly mind-boggling,” said Chris Lane, an analyst at Sanford C. Bernstein & Co., based in Hong Kong. He doubted if any new entrant could afford the required expense of building such a network.

The investment required for a new 5G network would be very substantial even for incumbent operators, which plan to leverage on their existing fixed-line network infrastructure, said Ramakrishna Maruvada, a Singapore-based analyst at Daiwa Securities Group Inc.

“The challenges for a new player, one with little fixed-line resources or 4G backward-compatible solution, would be manifestly much higher,” he said.

He suggested that if a new entrant were indeed to be granted a license, it would have difficulty developing a mass-market focus. Instead, it would have to target niche sectors such as the industrial internet or autonomous-vehicle industries — segments that would not cannibalize existing operators’ revenues.

Industry watchers said such a development, if it were to happen, would be positive for the newly listed China Tower Corp. Ltd., which was formed in 2014 through pooling the base station assets of China’s big three carriers. With all the nation’s base station assets now concentrated in a single operational firm, a new carrier could easily lease space to set up a new network.

China Tower’s formation came under a government directive to follow trends in more mature markets like the U.S., where carriers sold off their towers to independent operators so they could focus on their wireless networks.