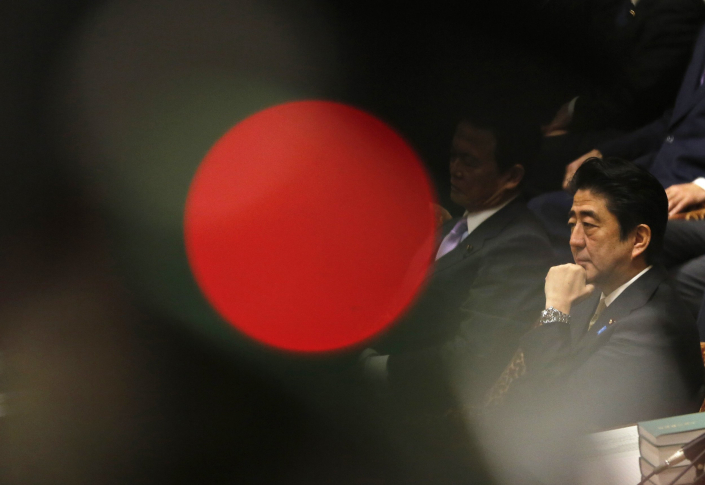 Coinciding with the commemoration of the 40th anniversary of the signing of the Treaty of Peace and Friendship Between Japan and China, Shinzo Abe’s visit to China was the first official visit by a Japanese prime minister to China in seven years — an important step for returning Sino-Japanese relations back to normal. From now on, China and Japan should regard each other as partners rather than rivals, and view each other’s development as opportunities rather than challenges.

Observers have noted that both Chinese and Japanese officials described relations as being “back on track,” which can be taken as a new consensus. During Abe’s visit, the two countries opened dialogue on a wide range of issues, including strengthening the foundation of mutual political trust, maintaining stability in Northeast Asia, and deepening Sino-Japanese cooperation in industrial investment. The cooperation in third-country infrastructure projects is especially encouraging and will allow the two countries to transition from years of wrestling for opportunities to working hand in hand. It is wise to turn opponents into partners.

The restoration of a warm political relationship will open greater space for economic and trade exchanges between the two countries. China’s deepening reform, wider opening to the outside world, and improving business environment will benefit both Chinese and Japanese companies. However, for Sino-Japanese relations to return to normal, the two countries must further firm up foundational, mutual awareness. Otherwise, relations between the two countries will fall into a cycle that alternates between warm and cold, or could even stop suddenly due to unexpected events.

We must learn from history. When the Treaty of Peace and Friendship was signed, China’s reform and opening-up was only just beginning. Deng Xiaoping’s 10-day visit to Japan at the time eased the stalemate and antagonism left over from the 1937-45 War of Resistance between the two countries and the Cold War. Japan has played an important role in China’s reform and opening-up, reflected not only in huge loans to China but also in China’s active study of Japan’s economic regulation and control system, industrial policy formulation, enterprise management system and more.

With the growth of China’s national strength and subsequent changes in the geopolitical situation, China and Japan are no longer in a one-way “teaching” and “learning” relationship, and it has been difficult for the two countries to adapt to such changes quickly. In Japan, some have been unable to adjust their posture of looking down on China since the Meiji Restoration, and are anxious that Japan was replaced as the world’s second-largest economy. However, more Japanese are gradually adapting to new trends. The Abe administration’s shift to support the Belt and Road Initiative maintains a positive direction and reflects a change in attitude.

In China, the rapid upgrade of national power has also stirred arrogance and prejudice in some people. In their eyes, Japan has been on the decline after its “lost two decades.” In fact, to be more precise, Japan has been experiencing “20 years of transformation,” and its productivity is still ranked among the top countries in the Organization for Cooperation and Economic Development. In some high-tech industries, Japanese companies have taken the lead in developing cutting-edge technology. While watching Japan struggle with problems of fewer children, an aging population, an unsustainable social security system, and high government debt, we should think more about what China will do when facing similar thorny problems in the near future. When people sneer at the difficulties in completing structural reform for Abe’s “Three Arrows” economic policy, they should think about how China can deepen its own supply-side structural reform. With this humble attitude, China can still learn from Japan’s rich experience in governance of education, health care, transportation, urban management and more. Of course, China should also avoid the detours of real estate bubbles and the premature internationalization of the yen.

Now, China-Japan cooperation in third-country markets has begun. While China’s officials, private citizens, and state-owned and private enterprises are proud of their capability and efficiency in construction projects, they should learn from Japanese counterparts how to communicate with local societies and from the experience of others in accounting, post-construction maintenance, and follow-up operations. These are all compulsory courses for China in order to successfully promote the Belt and Road Initiative and for the “going out” of enterprises to continue.

Needless to say, compared with the “China-Japan honeymoon period” in the 1980s, there are still many obstacles to clear for communication between China and Japan, and many misunderstandings still require resolution. Small frictions can be caused by customary behaviors, suspicions can also be caused by certain business behaviors, and severe misjudgments may arise around national development goals and strategic layouts. All conflicts, large and small, may sometimes hinder the stability of Sino-Japanese relations. Relations between China and Japan have always been touchy and are prone to comparison and re-examination. This is due to the burden of history and is an inescapable result of geopolitics, causing anxiety or inspiring action. Major media outlets in both countries bear extra responsibility for ensuring that negative sentiments remain in check. If national media incite narrow-minded nationalism, as it has done over the last seven years, they risk losing credibility among their readers when relations warm.

The basic method of “getting back on track” is still “seeking common ground while reserving differences.” “Reserving differences” does not mean turning a blind eye to the differences between the two countries in social and political systems, national interests, and values, but invites deeper understanding and empathy. If the differences cannot be resolved for a while, it is advisable to learn from the experiences of the older generation of politicians and put aside the disputes for the time being.

Whether relations are cold or warm, China and Japan are permanent neighbors. China is already Japan’s largest trading partner, with millions of personnel exchanges every year, showing that though there have been difficult times, the exchanges between China and Japan are as unstoppable as the waves of the East China Sea. For the long term, treating each other as equals, with mutual respect and tolerance is the right way to build a solid foundation for bilateral relations, reduce misjudgments, build consensuses, share gains, and allow the two nations to enter a new phase of mutual learning and encouragement.