By Coco Feng and Shen Xinyue 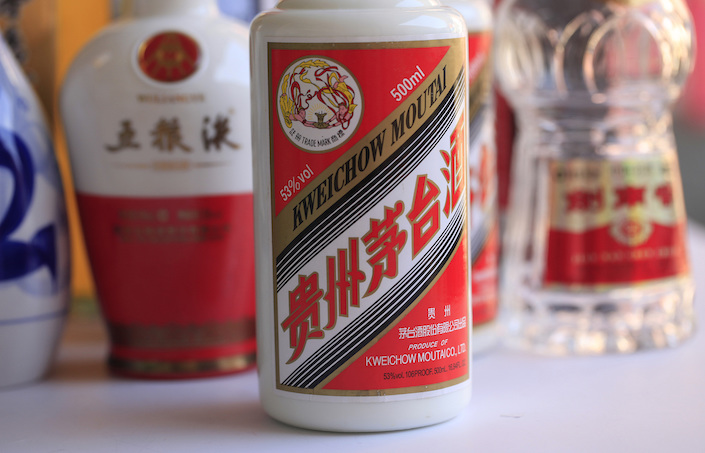 Shares for Kweichow Moutai reached their lowest point in a year on the heels of tepid third-quarter results. Photo: VCG

Shares of China’s most valuable tipple-maker, Kweichow Moutai Co. Ltd., closed down 4.57% on Tuesday to 524 yuan ($75.30) after opening down beyond the 10% daily limit on Monday for the first time ever.

Its stock price reached its lowest point in a year on the heels of tepid third-quarter results released over the weekend. The profit edged up by 2.7% to nearly 9 billion yuan, the slowest quarterly increase since 2015, while revenue grew only 3.8%, to 19.7 billion yuan. The two indicators grew 40% and 38% respectively in the first half of the year.

Smaller rivals have also faced a stock market slump. Wuliangye Yibin Co. Ltd. and Jiangsu Yanghe Brewery Joint-Stock Co. Ltd. continued to drop after falling by the daily 10% limit on Monday. The shares of 36 alcohol stocks listed on the Chinese mainland tracked by information provider Wind declined by an average of 2.77% on Tuesday.

In an attempt to reassure the market, Moutai said in a Tuesday filing to the Shanghai bourse that the third-quarter results were “in line with its expectations,” and that its businesses have been “stable.”

Market sentiment has been downbeat since early this month when rumors of an increase in the consumer tax on high-end baijiu began to spread. Concerns were heightened last week when a draft health care bill called for higher cigarette taxes, but so far there is no official sign of higher alcohol levies.

China’s baijiu industry has been through tough times since 2013, when Beijing launched an anti-graft campaign that sent fears through the sector, as China’s most popular hooch is a popular gift and social lubricant for deal-making. The companies started to recover in 2016 and a year later brewed a growth rate peak among the past few years. Analysts attributed the recent slowdown to a high benchmark from 2017.

A report from Founder Securities said that Moutai’s slowdown in the third quarter was mainly caused by a particularly strong performance last year and a shortage of Moutai due to its its complicated production process.

Independent liquor-industry analyst Cai Xuefei said that the economic slowdown has added pressure to the entire baijiu market, and that Moutai intentionally cooled sales so that there would be room for growth next year.

A report by China International Capital Corp. predicted that Moutai will raise the price of a flagship baijiu by 15% next year.