By Yang Ge and Zhang Xin 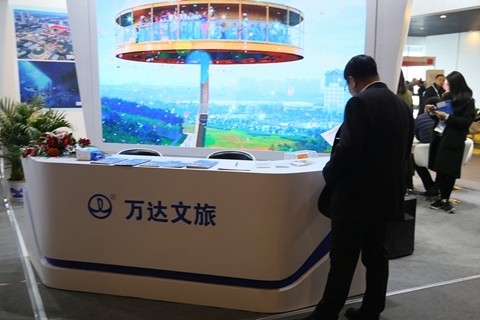 * Sunac said the deal will provide it with planning, design and construction management service capabilities for the 13 theme parks

(Beijing) — Real estate and entertainment conglomerate Wanda Group will sell the management arm of its former theme-park division to the division’s current owner, Sunac China Holdings Ltd., in its ongoing drive to pay down a heavy debt load after a multibillion-dollar spending spree.

Under the newly announced deal, Sunac will pay a collective 6.28 billion yuan ($902 million) for 100% of Wanda Cultural Management through a series of smaller purchases from Wanda and its related stakeholders, according to a stock exchange announcement from Sunac late on Monday. Sunac shares rose 1.7% on Tuesday in Hong Kong.

Wanda is among a group of former Chinese highfliers that went on global acquisition sprees over the last eight years, only to come under pressure to sell after Beijing clamped down in a broader campaign to lighten heavy corporate and government debt loads. Other notable buyers caught up in the clampdown include the travel-oriented HNA Group and property-focused Anbang Insurance.

Under Wanda’s latest sale, Sunac will have the right to rebrand the park management company and parks that were being developed under the Wanda brand. Wanda had embarked on the multibillion-dollar park development plan under its earlier vision to transform from its roots as a real estate company to an entertainment giant comparable to The Walt Disney Co.

Sunac said the deal will provide it with planning, design and construction management service capabilities for the 13 theme parks, as well as related consulting and operational management services for both parks and associated commercial areas. Wanda Cultural Management posted a net profit after tax of about 565 million yuan between Nov. 10 and Dec. 31 last year, and had unaudited net assets of about 740 million yuan at the end of last year, according to Sunac’s filing.

“The transaction will further clarify the operation management aspect of the cultural and tourism projects acquired by the group and further improve our management efficiency,” Sunac said. “In addition, through the transaction, the group has acquired a well-structured and experienced cultural, tourism and business operation management team, which facilitates to accelerate the establishment of the system capability and brand influence of the group in the cultural and tourism field.”

Sunac’s latest purchase comes just over a year after it bought Wanda’s portfolio of 13 theme parks and related developments for 43.84 billion yuan. At the time Wanda also announced the sale of its portfolio of 77 hotels to R&F Properties for another 19.91 billion yuan, in one of its first major asset sales under the bigger Beijing clampdown.

Wanda’s turbocharged acquisition spree of the last seven years included a number of global theater chain operators, as well as its $3.5 billion purchase of Legendary Entertainment in 2016. Those purchases were part of a larger global buying spree by Chinese companies of similar assets designed to cater to the country’s growing demand for high-quality entertainment. But Beijing has expressed specific displeasure at such purchases, which it considers frivolous, leading to a sharp decline of related deals over the last year.

Besides its theme parks and now its park management company, Wanda has also reportedly been looking to sell its stake in U.S.-based AMC Entertainment Holdings Inc., its main cinema operating company. Earlier this year the company, whose founder, Wang Jianlin, is one of China’s richest men, also announced it will sell a 7.8 billion yuan stake in its Shenzhen-listed film unit to e-commerce giant Alibaba Group Holding Ltd. and state-backed Cultural Investment Holdings Ltd.