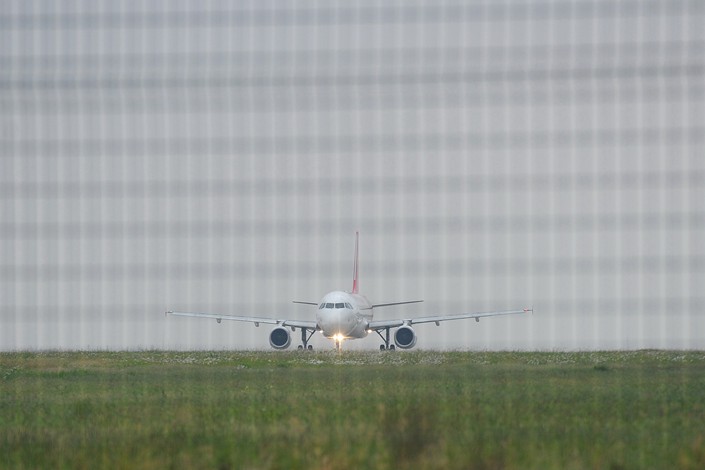 A jetliner moves down a runway at Zhoushan Putuoshan Airport in Zhoushan, Zhejiang province, on Oct. 28. Photo: VCG

(Beijing) — Boeing Co. is poised to deliver the first aircraft from its overseas finishing plant in China in December, as the commercial aircraft giant ramps up expansion in the world’s second-largest aviation market.

The newly completed 737 jetliner from the so-called Completion and Delivery Center in the city of Zhoushan, Zhejiang province, about 300 kilometers (186 miles) southeast of Shanghai, will be delivered to state-owned Air China Ltd., according to Boeing China President John Bruns, who revealed the development at a media event in Beijing on Friday.

In late 2016, Boeing entered an agreement with its Chinese partner, Commercial Aircraft Corporation of China Ltd., to establish the Zhoushan center. Boeing takes a controlling stake.

The facility is Boeing’s first overseas plane-finishing site outside the U.S. The plant doesn’t assemble entire jets, but mainly engages in final assembly work for the popular 737 model, including installation of entertainment systems, seats and other interior elements. The facility started construction early last year, and is expected to have the capacity to deliver 100 planes per year.

“The Completion and Delivery Center in Zhoushan will only serve our Chinese customers, supporting them to expand the fleet and become more successful in the market,” Bruns was quoted as saying by the official Xinhua News Agency over the weekend.

With a local plane-completion site, Boeing hopes to further expand its business in China, where its delivery of 202 new aircraft last year comprised nearly 30% of its global total.

Boeing predicted in September 2017 that China’s commercial airlines will likely buy up to 7,240 new carriers worth about $1.1 trillion over the next two decades, as the market is on its way to replace the U.S. as the world’s largest aviation market.

The establishment of Boeing’s Zhoushan facility came years after chief rival Airbus SAS set up its China production facility in 2008 in the port city of Tianjin, its first outside its home European market. Late last year, the French aircraft-maker delivered the first A320neo aircraft assembled in the city to Malaysia’s budget carrier, AirAsia.

As one of the world’s biggest aircraft buyers, China has lobbied for years to get both Boeing and Airbus to set up production facilities and transfer more of their respective technologies to the country.

China has also developed its own airliner, the Comac C919, which made its maiden flight early last year, as Beijing vies for a slice of the lucrative global commercial aviation market.