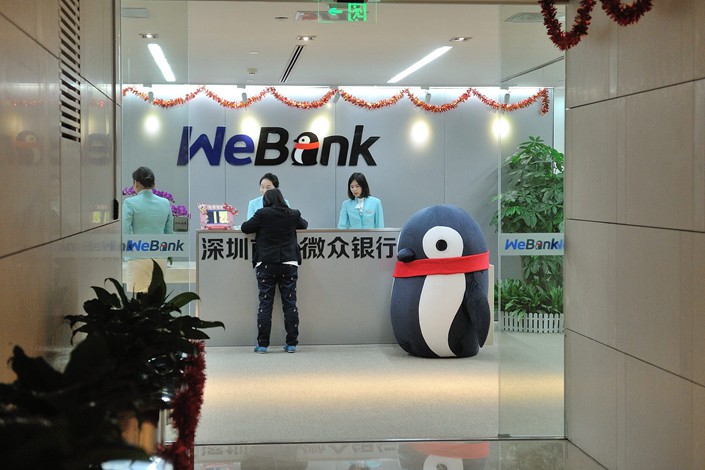 Tencent-backed online lender WeBank Co. Ltd. has reached a sky-high valuation of 147 billion yuan ($21 billion) after less than four years in operation, becoming one of the world’s largest “unicorn” companies.

The new valuation is based on a legal document (link in Chinese) attached to an auction notice on Taobao.com, which described the upcoming auction of a minor stake in WeBank.

The notice said Brightoil Petroleum (Holdings) Ltd. had been ordered to auction off 12.6 million of the WeBank shares it owns after failing to repay a bank loan, with a starting price of 441 million yuan.

The sale will see Brightoil disposing of 10.5% of its 2.86% holding in WeBank, valuing the micro-lender at 147 billion yuan, based on Caixin calculations.

According to a list of private companies compiled by data collector CB Insights, major U.S. rocket “unicorn” SpaceX was valued at $21.5 billion as of August 2018.

WeBank’s latest valuation makes it the fifth most valuable privately-held company in the world, based on the CB Insights list.

WeBank was launched in December 2014, just before China started a pilot program granting online lending licenses to non-bank operators in 2015.

Together with rival MyBank, backed by Alibaba Group Holding Ltd., WeBank was among a small group picked for the pilot program, which was aimed at bringing private money into the financial sector and giving China’s small and mid-size businesses better access to credit. Such businesses have been chronically underserved by traditional banks, nearly all of which are state-owned and accustomed to lending to state-run enterprises with strong government ties and access to real estate that can be used as collateral.

WeBank posted a net income of 1.45 billion yuan last year, more than three times its income in 2016. It had a loss of 583.8 million in its first operational year in 2015, according to its financial report (link in Chinese) published in August.