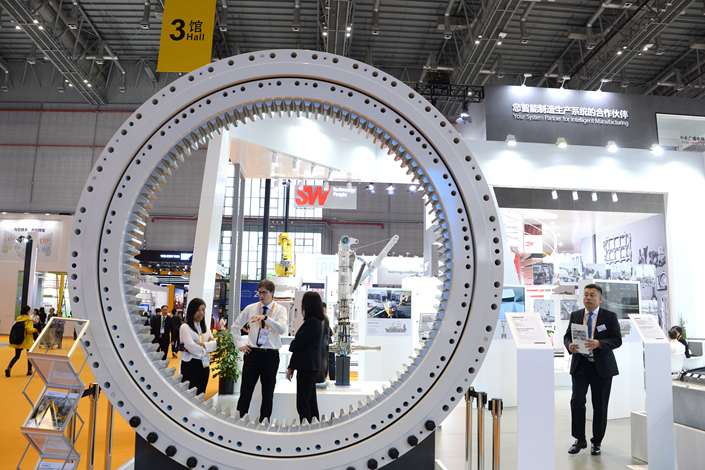 A German manufacturing system on display at the China International Import Expo in Shanghai on Nov. 5. Photo: IC

Deals worth $57.8 billion over the next year were proposed at the first China International Import Expo (CIIE) in Shanghai, according to official statistics, as the curtain falls on the week-long event that aimed to rebrand China as a global importer in an attempt to fend off accusations from its trade war adversary, the U.S.

Attendees agreed to deals worth $16.5 billion in the smart manufacturing industry, $12.7 billion in food and agricultural products, $12 billion in automotive products, $4.3 billion for consumer electronics and home appliances, $3.4 billion in consumer goods and $3.2 billion in services, according to a Saturday news release.

The total value of deals signed at the CIIE is equal to one-third of China’s imports in October, but came in under the $59.9 billion in deals made in this year’s China Import and Export Fair, also known as the Canton Fair, which dates back as early as 1957 and is the country’s best-known trade fair.

In contrast to the overtly political promotion of the event by local governments and state media, the press conference announcing the final deal tally was low-key. Only a handful of media outlets were invited to attend.

Mega-deals between China’s state-owned enterprises and foreign companies were prepared in advance, exhibitors told Caixin, so that lots of deals could be signed during the six-day event.

Local government-controlled purchasing groups were encouraged to sign as many deals as possible, though some plans were moved ahead without explanation, including one between the Shanghai Linggang International Trade Co. Ltd. and U.K.’s largest automaker Jaguar Land Rover, Caixin has learned.

Billed as a “political task” that dovetails with President Xi Jinping’s goal of promoting China as a responsible steward of the global economic order, the first import expo attracted 3,617 companies from 151 countries and regions to attend, according to the press release.

For large companies that have already built up their long-term presence in China, Xi’s remarks at the opening of the event on Nov. 5 didn’t offer much in the way of new policies for opening the Chinese market — something that some foreign businesses considered key to the event’s success.

So instead, the foreign businesses used the event as extended networking opportunity. According to James Sassoon, chairman of China-Britain Business Council, “meeting with important delegations and officials from different provinces and other parts of China” is one key benefit for U.K. companies at the fair. It will be “an important function of the CIIE in future years.”