By Liu Shuangshuang and Jason Tan 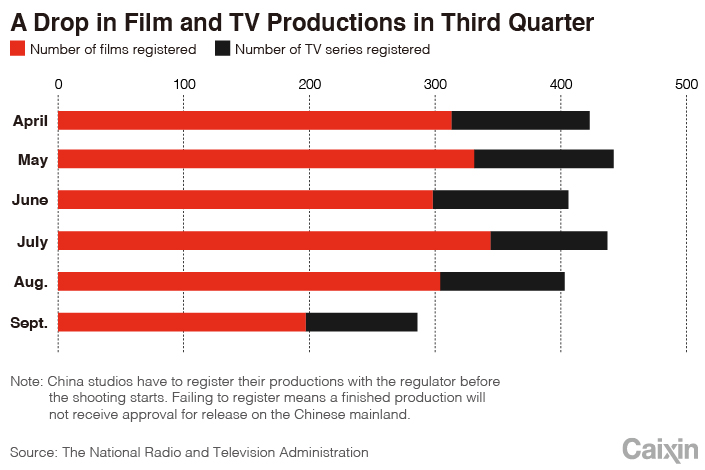 * A total of 1,126 new films and TV series were registered with the industry regulator in the third quarter, 11% fewer than in the preceding quarter

(Beijing) — An early winter has descended on China’s showbiz industry, spreading a chill over everyone in the industry — actors, producers, studios and possibly audiences, too.

It began with the Fan Bingbing scandal, which emerged in May when a whistleblower said the star had evaded a huge tax bill by supplying authorities with fake contracts, which, it was claimed, was a common practice for A-list celebs.

Then the actress, who is best known to American audiences for her role in the “X-Men” franchise, vanished from public sight for four months, fueling speculation she had been arrested. She reappeared in October, apologized for tax evasion and was ordered to pay a staggering $129 million in unpaid taxes and fines.

In the wake of Fan’s case, the tax regulator ordered celebrities and entertainment companies to “self-inspect” their tax payments and pay up dues dating back to 2016. Those that fail to do so by next March will be “severely punished,” it said. The authorities will also review their tax policies toward the industry and establish a new system by July 2019.

This crackdown has sent a shockwave through show business, market watchers told Caixin. A number of productions have been put on hold, and the much-needed capital to keep them running has run dry for the time being. It’s still unclear how hard Beijing will continue to chase tax evaders, and to what extent they would be punished.

“Many projects have been scrapped over the past six months,” a TV drama producer based in the Zhejiang province town of Hengdian told Caixin. Dubbed “China’s Hollywood,” Hengdian is the bellwether for the entertainment industry as it churns out a quarter of the country’s films and a third of drama series.

“One executive producer friend rejected an offer to get involved in a big production to instead work on a TV drama project, and after four months he is still waiting for news on when the series will begin shooting,” said Zhou Peng, an action flick director. He said his own schedule has also become somewhat bare — two online films he was hired to direct in the second half of this year were canceled.

The data speaks for itself. Caixin learned from the National Radio and Television Administration that only 1,126 new films and TV series were registered with the industry regulator in the third quarter, 11% fewer than in the preceding quarter. In September alone, the registered number was 286, down from an average of 400 in the earlier months of this year.

Where is the money

The crackdown on tax evasion has prompted China’s major film production cities to suspend or tweak the preferential policies they used to attract the entertainment industry, as the authorities start to scrutinize tax records of studios and performers.

Take the tax-haven of Khorgas in the Xinjiang Uygur autonomous region. The small northwestern border city was granted special economic zone status in 2010, which allowed it to offer generous tax benefits including exemptions to entertainment companies registered there.

In early October, Caixin discovered over 70 entertainment production and distribution firms have deregistered their Khorgas-based corporate entities since July. Many of the companies have ties with household names, including award-winning director Feng Xiaogang and director and actress Xu Jinglei.

Khorgos has recently demanded companies whose profits totaled more than 50% of total revenue in 2017 to conduct “self-checks” on their tax records, and that companies should set aside 20% of their exempted annual corporate taxes for “local investment” that includes social insurance payments.

China’s three other entertainment industry tax-havens — Hengdian, the Jiangsu province city of Wuxi and Shanghai’s Songjiang district — have also reduced their tax subsidies. A Hengdian studio told Caixin that the town has lost its glimmer for now — a company that earns 5 million yuan ($725,252) in annual revenue is expected to see its income tax burden surge to 1.7 million yuan from 180,000 yuan previously.

“It’s a pretty sure thing that over the next one to two years, thousands of studios may close shop,” said Wang Changtian, CEO of the Shanghai-listed production company Beijing Enlight Media Co. Ltd. “We have 20,000 players now in the industry and this is really too many.”

Headwinds have also hit major players. Talent Television and Film Co. Ltd. forecast that its third-quarter profit will drop by over 90% from a year ago to as low as 5 million yuan. This is because its big-budget costume drama “Win the World,” which stars confessed tax cheat Fan, has its release date postponed indefinitely by the authorities.

Talent said it spent 580 million yuan producing “Win the World,” an amount equal to almost half of its total revenue last year. The delayed release date has left it with 1.5 billion yuan of accounts receivables — payments it is waiting to receive from other firms — and a 60 million yuan cash crunch.

In view of the doom and gloom, industry watchers said audiences could be on the losing end.

“With everyone now turning off their cameras, what is in store for viewers next year?” Wang Guofua, an official from the National Radio and Television Administration’s Zhejiang branch, asked at an industry event in October.