By Zheng Lichun and Ke Dawei 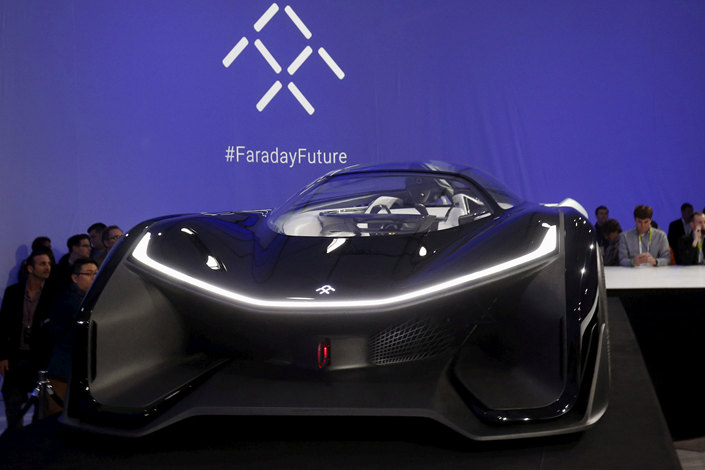 Faraday Future’s FFZero1 electric concept car is seen after its unveiling at a news conference in Las Vegas, Nevada, in January 2016. Photo: VCG

* Faraday struggles to secure new funding as Thursday deadline looms to give the company’s 1,300 U.S. employees $1.63 million in half-wages

* Faraday’s new head of research and development said that Evergrande has introduced staff monitoring measures and camera systems that he said will destroy employees’ creativity.

Speaking at a company meeting on Monday, Jia said that he misread Evergrande Group’s intentions when its Hong Kong-listed health-care unit invested in Faraday Future last year, and that it really was seeking to take global control of the company, Caixin has learned.

Late last year, Evergrande Health Industry Group Ltd. agreed to invest $2 billion over three years and take a 45% stake in Smart King Ltd., which controls Faraday. At the Monday meeting, Jia said that Evergrande Health wished to incorporate Faraday into Evergrande Health, whereas Jia maintained that it must be operated independently.

Also on Monday, legal action began in Hong Kong after Smart King filed an application for arbitration to take away Evergrande’s right to veto Faraday’s plans to seek outside funding for itself as it faces as imminent cash crisis.

An earlier arbitration in Hong Kong allowed Faraday to seek as much as $500 million in new funding from investors in addition to the existing $2 billion deal with Evergrande as long as the new funding didn’t lower Faraday’s valuation.

Yet financial assistance might not come in time. A person working with Faraday’s U.S. research and development team told Caixin that the company’s 1,300 U.S. employees are due to be paid $1.63 million in half-wages on Thursday, but at present the funding situation has not been resolved.

At the same company meeting on Monday, Matthias Adyt, the new head of research and development at the company, also said that Evergrande has introduced staff monitoring measures and camera systems that he said will destroy employees’ creativity.

Faraday had been helping to turn its fortunes around by getting its first production vehicle, the FF 91, built at its factory in Hanford, California, finished by the end of the year. However, company insiders told Caixin that the factory has in fact been closed for the last two weeks. On Oct. 31, the company said it may have to terminate the contracts of some U.S. employees. The company has nearly 2,000 employees globally.

But the investment deal fell into dispute in August. Evergrande Health said Faraday manipulated it into paying $700 million ahead of schedule by forcing it to sign a supplemental agreement in July after Faraday squandered the initial $800 million.

For its part, Faraday accused Evergrande of deliberately delaying its promised investment and trying to “gain control and ownership” over Faraday’s China business and all of the automaker’s intellectual property.

The squabble between the pair is expected to cast further doubt on Faraday, which has been strapped for cash amid the legal troubles of the founder and CEO. Jia has been blacklisted as a debt defaulter by Chinese regulators for failing to repay about 480 million yuan ($69.0 million) in debt owed by LeEco, the one-time star Chinese tech company that Jia founded.