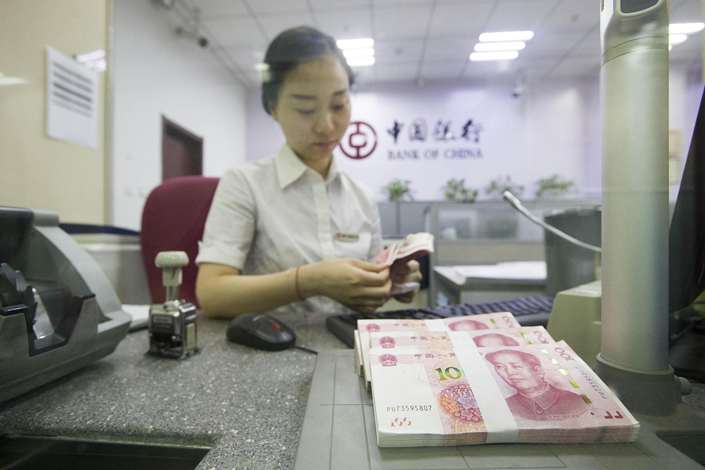 A worker counts cash at a Bank of China branch. Photo: VCG

*Bank of China has set up an independent subsidiary to manage investments made with funds raised from selling wealth management products, becoming the 15th lender to do so and the first of the big four state-owned commercial banks

* Banks were previously told to set up such units by 2020, however draft rules open for public comment until Nov. 18, say the requirement is not mandatory

(Beijing) — Bank of China has become the first of the big four state-owned commercial lenders to announce plans to set up an independent subsidiary to manage investments made with funds raised from selling wealth management products.

The bank joins 14 other lenders, including China Merchants Bank, Bank of Communications, and Bank of Nanjing, in setting up separate companies for their wealth management operations following April’s release by the People’s Bank of China of the final draft of a regulatory overhaul for the country’s unwieldy asset management industry. Banks were told to set up such units by 2020, although on Oct. 19 in draft rules open for public comment until Nov. 18, the banking watchdog said the requirement was not mandatory, and banks could instead integrate their wealth management operations into an affiliated company.

The China Banking and Insurance Regulatory Commission announced the same day that wealth management subsidiaries would be allowed to directly invest in stocks, a step some analysts saw as part of efforts to rescue the stock market which slumped around 27% this year through Oct. 18, just before the government launched its campaign.

Giving banks' wealth management operations the right to directly invest in stocks could present challenges for the mutual fund industry as lenders no longer have to depend on these partners to access the equity market. This will “turn banks and mutual fund firms from partners to rivals,” a fund manager told Caixin.

The scrapping of the minimum investment threshold for banks wealth management products will also add pressure onto mutual funds given the massive client base of commercial banks and their large presence in the market which could draw customers away from the funds.

The new rules have also triggered a war for talent as banks seek to bolster their expertise in stock picking. “For the banks, the fastest way is to poach investment analysts from mutual fund managers,” an executive with a fund manager, who declined to be identified, told Caixin.

Some banks are reluctant to set up independent wealth management subsidiaries, however, because they are concerned that the parent company could lose control over the capital and see its influence weakened, the director of the asset management department of one commercial bank told Caixin.