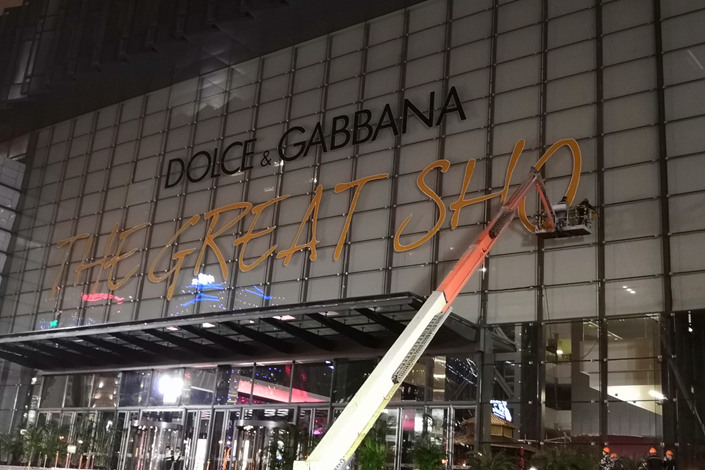 A sign advertising a Dolce & Gabbana fashion show in Shanghai, which was cancelled in the wake of public outcry against the company, is taken down on Nov. 21. Photo: IC

Wrath over a controversial ad campaign from Dolce & Gabbana (D&G) continues to rage on, in another instance that highlights the need for cultural and political sensitivity among those aiming to cash in on the Chinese consumer.

The criticism has snowballed into public relations nightmare — e-commerce platforms have reportedly pulled thousands of D&G products off their shelves, with celebrities vowing to boycott the Italian fashion house and state media warning the brand of “losing China’s market and the benefits arising from it.”

A search by Caixin on Thursday found that many Chinese e-commerce platforms, including Tmall, JD.com, Yanxuan and Vipshop, have delisted D&G products. A JD.com Inc. spokesman confirmed to Caixin that all relevant items had been removed from its platform in the wake of the controversy. Cross-border e-commerce platform Yangmatou said in a post Wednesday that a total of 58,000 D&G items have been pulled from its platform.

Such platforms are key to retail sales in China, where online shopping is massively popular. The Double 11 online shopping festival held every October now exceeds the combined gross merchandize values of Black Friday and Cyber Monday in the U.S.

The saga kicked off over the weekend, when the “DG Loves China” online ad campaign sparked uproar online upon its release. The campaign — which includes three short videos in which a male narrator lectures an East Asian-looking woman in a sequined D&G dress on how to eat Italian food with chopsticks — has been accused by angry Chinese netizens of being stereotypical, racist and sexist.

In one video, the male narrator asks the woman if a cannoli “is too huge for you?” D&G has since deleted the videos from China’s Twitter-like Weibo microblogging site, though they are still viewable on the company’s Instagram account.

Later, screenshots that circulated of co-founder Stefano Gabbana's private message box on Instagram worsened the drama: the designer described China using poop emojis and said that the videos were posted “by my will.” The brand said its account and that of Gabbana had been hacked.

“It’s not convincing enough to shift the blame to hacking,” said a public relations specialist who requested anonymity. “We just didn’t feel that such an apology was sincere enough.”

The top management should have taken responsibility for what happened, reflected on their corporate values and cultural sensitivity, and proposed crisis management measures to salvage the situation, she said.

State media outlets have joined the chorus of condemnation.

Official Communist Party newspaper the People’s Daily said the designer’s insulting remarks towards Chinese have been met with a national boycott, and have resulted in the cancellation of a fashion show and products being forced out of e-commerce platforms.

“It is inflicting humiliation on itself … Chinese have always welcomed foreign companies, but that doesn’t mean it is without a bottom line — respect is a prerequisite for businesses deals,” the newspaper said on its Weibo account. The post has received more than 80,000 likes and 5,200 comments.

According to consultancy McKinsey & Co., Chinese spent 500 billion yuan ($72 billion) on luxury products last year, accounting for a third of the world’s spending.

Multinationals often stumble over cultural barriers because their Chinese offices usually take orders from their global headquarters, which can lead to mishaps in their marketing campaigns, wrote Li Guowei, who worked as China communication chief at General Electric Co. for 15 years, in a commentary (link in Chinese) published by Caixin Thursday.

D&G is not the first to spark anger, some of it with nationalist undertones, due to a lack of cultural and political awareness.

In January, U.S. hotel giant Marriott International Inc. sparked anger over its description of Hong Kong, Macau, Taiwan, and Tibet as “countries” in a customer survey. Marriott generated even more controversy after it was discovered that its Twitter account “liked” a post by “Friends of Tibet,” a group which advocates for the region’s independence from China. The company has since apologized and fired the employee responsible for the post.

This was followed by another similar case involving Daimler one month later. The German carmaker apologized for "hurting the feelings" of the people of China for quoting the Dalai Lama on Instagram. The Dalai Lama is considered a separatist by the Chinese government.