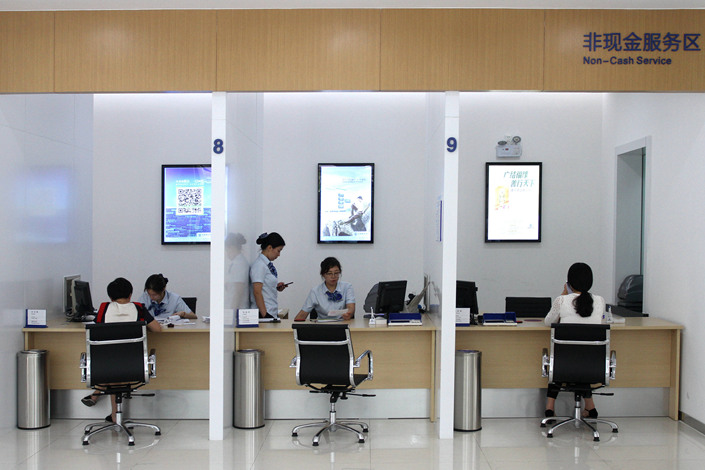 The last three of China’s big four state-owned banks have announced plans to set up independent wealth management subsidiaries, though the new units could end up cannibalizing their own established businesses.

Industrial and Commercial Bank of China Ltd. (ICBC), the country’s biggest lender by assets, announced on Monday that it will form a fully owned subsidiary with as much as 16 billion yuan ($2.30 billion) in registered capital. The purpose of the unit will be to manage investments made with funds raised by selling wealth management products. Agricultural Bank of China Ltd. (ABC) also said on Monday that it’s ready to invest up to 12 billion yuan to set up such a subsidiary, while China Construction Bank Corp. (CCB) announced it will put up 15 billion yuan, according to the announcements on their respective websites.

The three banks are following in the footsteps of Bank of China Ltd., which announced on Nov. 15 that it will invest 10 billion yuan in its own independent wealth management unit.

However, given that the four have already been running wealth management businesses within internal asset management units, they could be creating their own competition, as well as rivals for the mutual fund companies they have been partnered with.

Chances are the independent subsidiaries might end up competing against the wealth management operations inside the banks and their other asset management arms, a source close to the matter told Caixin.

In the past, banks had to sell wealth management products through a partner mutual fund firm. However, circumstances changed when the China Banking and Insurance Regulatory Commission (CBIRC) released draft rules in October that allowed commercial banks to directly invest in stocks by creating wealth management subsidiaries. At the time, analysts saw the measure as part of efforts to rescue the Chinese mainland’s slumping stock markets.

Initially, the four banks were “reluctant to set up such subsidiaries,” said a source close to an executive of one of the big four banks. They were concerned that the parent company could lose control over the capital and see its influence weakened, the director of the asset management department of one commercial bank told Caixin earlier.

Despite the fact that it’s now easier for the banks to invest in stocks, analysts said that it will take more time for them to pour money raised from wealth management products into the stock market.

“Even now, banks are far from investing in stocks with their full capacity, so we don’t expect a large amount of stock investment in the short term even though the restrictions are lifted,” analysts from Haitong Securities said in a research note.