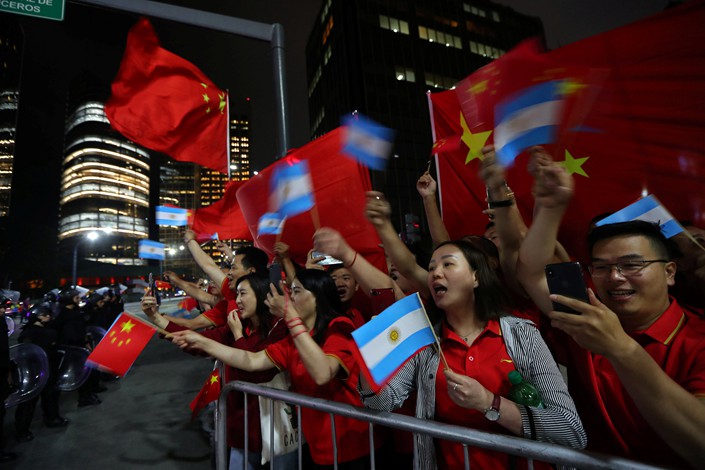 Members of the Chinese community in Argentina cheer as President Xi Jinping arrives at a hotel ahead of the G-20 leaders summit in Buenos Aires on Nov 29. Photo: VCG

Argentina's government has signed a $1 billion deal with a Chinese state-owned rail-builder to upgrade a major cargo railway line running across the country that could help to lower the cost of shipping raw materials and grains, including soybeans, its main cash crop.

The agreement with China Railway Construction Corp. Ltd. will involve renovation and repair to the 1,020- kilometer (634 miles) San Martin railroad, which links the port city of Rosario in the east and Mendoza province in the west, Argentina’s state-owned media Telam reported on Thursday.

The announcement comes as a two-day summit of leaders of the Group of 20 nations kicks off in Buenos Aires. China’s President Xi Jinping is attending and is expected to announce a series of other multi-billion dollar deals with Argentina. China is currently Argentina’s third-largest trading partner, after Brazil and the U.S., and imports mostly raw materials and minerals.

Chinese companies are already involved in upgrading Argentina's aging and dilapidated railway system. China is the main investor in a project to renovate 1,700 kilometers of the Belgrano freight rail network which runs from Buenos Aires in the east to the Bolivian border in the west. In August, China State Construction Engineering Corp. said it won a $2.13 billion contract to build a 538-kilometer highway over five years in Argentina.

The San Martin railroad stretches across six provinces and when the upgrade is completed, it will offer famers an alternative means of transporting their raw materials and agricultural products to ports on the east coast other than by truck. It will generate savings of more than $200 million per year in logistics costs, Telam reported, citing Argentina’s Ministry of Transport.

The volume of cargo shipped on the railroad is expected to increase from 1.5 million metric tons per year to 3 million in 2025, and 8 million by 2030, the ministry said. The deal will initially generate 3,800 jobs, a figure that's forecast to double over the seven-year life of the project.