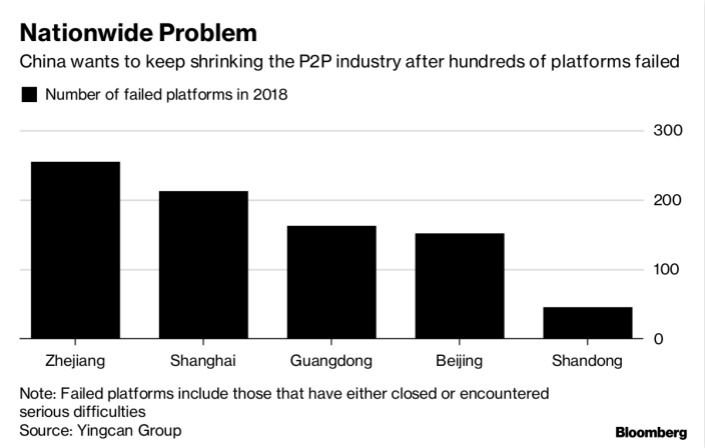 (Bloomberg) — China is preparing to end its $176 billion experiment with peer-to-peer (P2P) lending.

Alarmed by a surge in defaults, fraud and investor anger, Chinese authorities are planning to wind down small- and medium-sized P2P lending platforms nationwide, people with knowledge of the matter said. Regulators may also order the largest platforms to cap outstanding loans at current levels and encourage them to reduce lending over time, one of the people said, asking not to be identified discussing private deliberations. Shares of P2P platform operators sank in New York.

The planned shakeout, which broadens a city-level purge in the P2P hub of Hangzhou, is the clearest sign yet that Chinese leaders want to dramatically shrink a market that spawned the nation’s biggest Ponzi scheme, protests in major cities, and life-altering losses for thousands of savers. It suggests that Xi Jinping’s government isn’t done cracking down on China’s $9 trillion shadow banking industry, despite concern that tougher rules have choked the flow of credit to the world’s second-largest economy.

“This is a long overdue area for crackdown in China, because many of these platforms are simply zombie platforms that spend a lot of money to build up scale and many of them have simply failed,” said Martin Chorzempa, a research fellow at the Peterson Institute for International Economics in Washington. “You can allow the lending to expand by better regulated institutions and continue to have the provision to the smaller and especially private companies that really desperately need it.”

Marketed as an innovative way to match savers with small borrowers, P2P platforms have had a rocky run globally. U.S.-based LendingClub Corp., battered by a corporate a governance scandal and investor withdrawals, has tumbled 77% since its 2014 listing in New York.

In China, P2P platforms comprise one of the riskiest and least regulated slices of the shadow banking system. The lack of oversight has allowed for world-beating growth, with outstanding P2P loans ballooning from almost nothing in 2012 to 1.22 trillion yuan ($176 billion) in December 2017.

At first, the platforms worked mostly as intended. Savers enjoyed double-digit yields with few defaults, while small companies secured cash to fund their growth. About 50 million investors signed up — more than the populations of New York state and Texas combined —as P2P platforms opened at a rate of three a day.

Problems began to emerge as China’s economy slowed and liquidity conditions tightened. One of the first big signs of trouble: the unraveling in early 2016 of a P2P platform described by authorities as a $7.6 billion Ponzi scheme that defrauded 900,000 people.

Not long after, Chinese policy makers started a campaign to clean up the country’s shadow banking system. The clampdown further restricted access to credit and fueled a wave of P2P platform closures. China Banking and Insurance Regulatory Commission Chairman Guo Shuqing warned savers in June that they should be prepared to lose all their money in high-yield products, underscoring the government’s intention to avoid a big rescue and the associated moral hazard.

More than 80% of China’s 6,200 P2P platforms have now either closed or encountered serious difficulties, due to factors ranging from take-the-money-and-run schemes to poor investments, according to Shanghai-based researcher Yingcan Group. The platforms had more than 1.5 million clients and 112 billion yuan of outstanding loans.

Hundreds of affected P2P investors have organized protests in cities including Shanghai, only to be turned back by police. At least one victim of P2P fraud, a 31-year-old woman from Zhejiang province, reportedly committed suicide after losing almost $40,000.

In Hangzhou, a Chinese fintech hub that’s home to Jack Ma’s Alibaba Group Holding Ltd., regulators have told some P2P platforms with less than 100 million yuan of outstanding loans to wind down and repay customers within 12 months, Bloomberg reported earlier this month.

Authorities now plan to issue similar orders to platforms in other cities and provinces, including Shanghai and Beijing, people with knowledge of the matter said.

“Regulators are making it even more difficult for P2P platforms to survive, especially the smaller ones, so that the public won’t suffer more losses,” said Yu Baicheng, Shanghai-based head of research at 01Caijing, an independent internet finance researcher.

It’s unclear what will ultimately remain of China’s P2P market after the clampdown, but analysts predict there will be few survivors. Only 50 of today’s 1,200 platforms are likely to get regulatory approval to keep operating, according to Citigroup Inc. The industry’s outstanding loans have already dropped by more than 30 percent from the peak.

Even the nation’s biggest P2P platform operators appear to be anticipating tougher times ahead. CreditEase, the parent company of Yirendai Ltd., China’s first listed P2P business, has begun distancing itself from the industry.

“We are today much more than a P2P,” Ning Tang, CreditEase’s founder and chief executive officer, said in a Bloomberg Television interview this month. “When we started the company, we invented China’s marketplace lending model. Today, we are a fintech company.”

Yirendai dropped 4.2 percent in New York on Thursday, extending its decline this year to 63 percent. The stock is a favorite target of short sellers, who increased their bets against it to an all-time high at the end of October, according to exchange data compiled by Bloomberg. PPDAI Group Inc., a U.S.-listed rival, fell 10 percent.

“Clearly, things have been messy,” said Tang Shengbo, a Hong Kong-based analyst at Nomura Securities Co. who estimates that at least 80 percent of China’s remaining P2P platforms will eventually shut. “The industry is heading for a massive consolidation.”