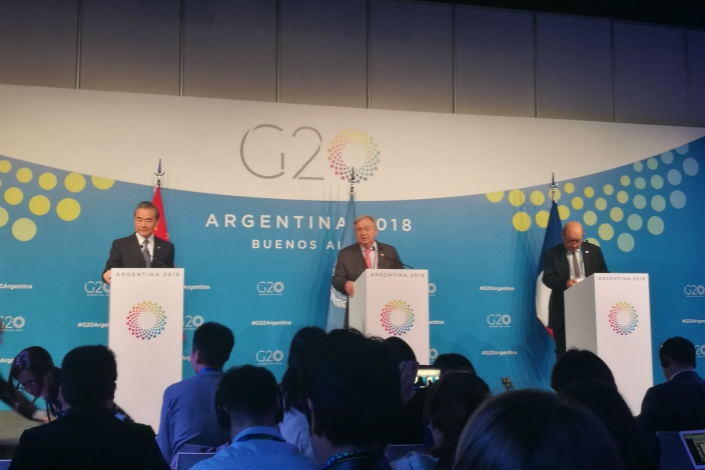 (Buenos Aires) — A tense summit of the Group of 20 opened Friday in Buenos Aires with world leaders facing the challenge of forging consensus on increasingly divisive front-burner issues including global trade and climate change.

The G-20, consisting of 20 world-leading nations, was created to coordinate joint responses to the global financial crisis 10 years ago. This year, the annual conference of member countries’ heads of states takes place in a more divided world, overshadowed by the escalating trade war between China and the U.S., the world’s two largest economies, and mounting pressures on the multilateral trading system.

“Even though the agenda that brings us together today is different, I’d like to ask you to act with the same sense of urgency that brought us together in 2008,” Macri said.

“I invite you to send a clear message to the world and to show them that we are capable of building a common development strategy by assuming shared responsibilities and making a commitment to gender equality and unity in diversity,” Macri said.

But there are ominous signs of the obstacles to consensus that lie ahead. Two other major summits this year — the G-7 summit and the Asia-Pacific Economic Cooperation forum — both ended without customary joint statements.

The most anticipated face-to-face will be a dinner Saturday between Trump and Xi, which could help de-escalate the trade war. According to a White House briefing Friday, Trump voiced optimism about a possible trade deal with China.

“We’re working very hard. If we can make a deal, that’d be good. I think they want to; I think we’d like to,” Trump said. “There’s some good signs. We’ll see what happens.”

When asked about the host country’s views on the China-U.S. trade war, Argentina’s international trade secretary, Marisa Bircher, called it “THE” question.

“Argentina has an excellent relationship with both countries, the United States and China,” she said. “Both countries trust Argentina, and they invest here. We want to continue having a very good dialogue with them.”

Bircher said she expected G-20 leaders to build a consensus during the summit and set a tone for the future of international trade.

On the margin of the summit, a new trade agreement involving the U.S., Canada and Mexico was signed. The new U.S.-Mexico-Canada Agreement, or USMCA, will replace the nearly 25-year old North American Free Trade Agreement, or NAFTA, and settle a year-long trade dispute between America and its closest neighbors.

The agreement will still need to be ratified by all three countries before it can formally take effect.

“The new agreement lifts the risk of serious economic uncertainty that lingers throughout the trade renegotiation process — uncertainty that would have only gotten worse and more damaging had we not reached a new NAFTA,” Canadian Prime Minister Justin Trudeau said.

"This has been a battle, and battles sometimes make great friendships," Trump said at the start of the signing ceremony.