Opinion: Institutions Should Be Held Responsible in Fight on Financial Corruption 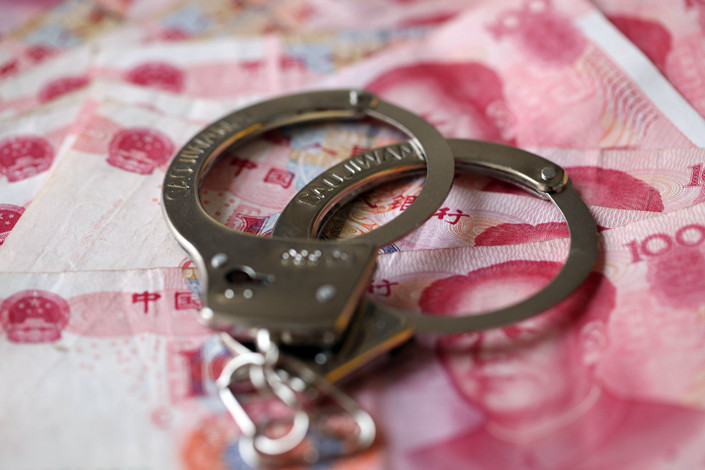 It is common practice to adopt the so-called "indict individuals and spare organizations" principle. Individuals are often thoroughly investigated and charged with criminal offences according to the law. But when it comes to organizations, the authorities are more cautious, and there are generally not major indictments against institutions, if there are any indictments at all. Apart from the consideration of maintaining stability, institutions also have stronger lobbying ability. As protégés of their respective regulators, institutions often receive “paternal” protection. Or in some cases, a shareholder has a local government background or is a large private or state-owned enterprise with political connections.

Therefore, no matter how serious the case is, and even if the institutions involved are not systemically important and the organizations’ internal control systems are non-existent, they seem to be immune from full accountability. In practice, institutions often abuse the excuse of “forged documents” and individuals’ violation of discipline, distancing the organization from the case to shirk responsibility.

In the past year or two, regulators have begun to impose harsher penalties on the institutions involved in corruption cases. They have begun to issue fines of tens or hundreds of millions of yuan. However, this is still not enough to establish deterrence. It is rare for a company to be closed down for a specified period due to serious violations of laws and regulations, and we have never seen an organization have its licenses revoked due to corruption.

Financial authorities and institutions have recently been hailing campaigns to clean up the “poisonous influence” of corruption figures, after the fall of former insurance regulatory chief Xiang Junbo and Lai Xiaomin, the former chief of the state-owned bad assets managing company China Huarong.

The elimination of "poisonous influence" has also become an important part of Communist Party study sessions at the organizations in question, which aim to eliminate from within the negative impact of individuals who break the law and violate discipline. But defining "poisonous influence" in the field of financial anti-corruption requires careful analysis.

Generally speaking, the definition of "poisonous influence" is the lingering effect of financial professionals’ close personal relationships with the perpetrators, which can lead to channeling of interest, including bribery, cover-ups of wrongdoings and trading official positions for profit. These activities of course need thorough investigation, and although there often are individuals who evade justice, given time and a unified principle we still have the chance to uncover them one by one. But deeper still is the need to see the underlying nature of corruption, whether or not people are still abusing financial institutions' licenses and resources for the benefit of individuals, even at the expense of institutions and clients. Whether the anti-corruption campaign can make an example and purify corporate culture and the financial environment depends on whether this principle can be implemented in financial institutions.

This involves the basic attitude toward non-performing assets, from generation to disposal. Financial institutions are enterprises that manage risks, so the appearance, management and disposal of non-performing assets are natural. Once a risk event appears, it is necessary to clearly define whether it is caused by normal business failure and incorrect judgment, or whether it is caused by corruption and if there is channeling of interest between decision-makers at financial institutions and enterprises. In the former situation, we can be more fault–tolerant and exempt the institution from liability; if it is the latter situation, we need to pursue to the end, rather than stopping when “the risk has been defused.”

There are also two distinct ways to defuse risk. The first is to recruit the relevant people and companies to "lend a hand" to help delay and disguise the risk. In reality, the financial institutions themselves are paying for the cover-up. This is an expedient measure and also a hotbed of corruption. It also corrupts company balance sheets and compromises the long-term interests of financial institutions, which regulators should not tolerate. The second way is to face the problem head-on, seek truth from facts, compile the balance sheet truthfully, and write off bad debts whenever needed. After a “big bath,” introduce restructuring partners with real money and strength, and really mitigate the risks. That is the right way.

Dealing with risk tests the skills and ethics of financial professionals. Advancing one’s personal interests at the expense of the legitimate rights and interests of financial institutions is financial corruption’s most common "poisonous influence"; it also mercilessly erodes the financial industry’s integrity. Whether it is the bond market cases, or the Huarong cases under the rule of Lai Xiaomin, or all the various cases of financial corruption, they are all subject the question: what will happen if we deal with the mess created by corruption with the same methods used by the perpetrators?