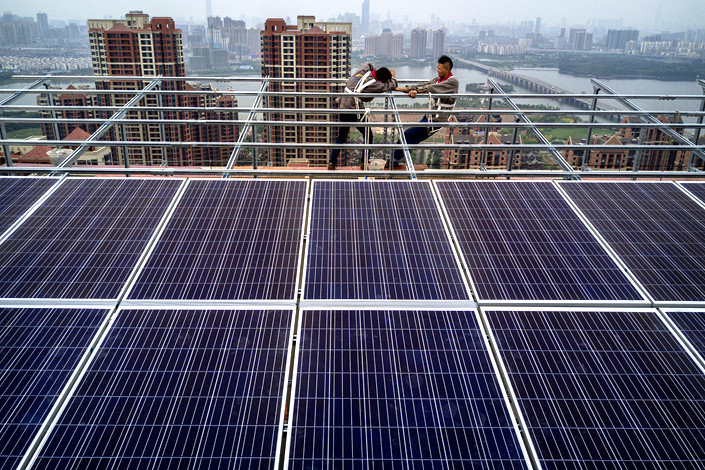 Wuhan Guangsheng Photovoltaic Co. employees in Wuhan, Hubei province, work on a solar panel project on the roof of a 47-story building in May 2017. Photo: VCG

China’s state planner, the National Development and Reform Commission (NDRC), announced plans for a new renewable-power quota system to be launched by the end of the year as it looks to cut large-scale waste of its renewable energy sources.

China is a world leader in green technology, with renewables accounting for two-thirds of newly installed power capacity last year.

However, inadequate grid development, known as “curtailment,” has limited the ability to ensure that renewable power is fully utilized across the country. This has caused “contradiction and conflicts” that have “restricted the power industry’s healthy and sustainable development,” according to the NDRC’s newly published “2018-2020 Clean Energy Consumption Plan” (link in Chinese).

The plan lays the targets of reducing wind, hydro and solar power curtailment to 5% by 2020, from up to 12% currently, with each region to be given a quota for renewable energy consumption.

Under draft rules released earlier this year, provincial-level regions that fail to meet their obligations may be denied approval for new coal capacity. The latest plan also sets targets for promoting better transmission of power resources between regions, although it does not include details of how the targets will be achieved.

Zhang Jianyu, the Beijing representative of the Environmental Defense Fund, a U.S. nonprofit group, praised the targets, saying they “reaffirm China’s ambition of reducing the carbon intensity of its power sector.”

“From the infrastructure perspective, with recent-commissioned, ongoing and planned Ultrahigh-voltage transmission projects, the larger-volume and long-distance power transmission between load centers and renewable production centers are now possible,” he said.

China has invested more in renewable energy than the U.S. and EU combined, and accounted for 45% of global investment in the space in 2017. The Wilson Center, a U.S. think tank, reckons China could generate 80% of its energy from renewables by 2050.

However, capacity is not being matched with usage. For example, there is a lack of transmission capacity to ensure turbines in China’s wind-swept northern and western provinces benefit the nation’s more-populous east. The same issue applies to hydropower, which is abundant in the mountainous provincial-level regions of Tibet, Sichuan and Guizhou. Around 104.6 billion kilowatt-hours (kWh) of electricity were wasted in 2016 — about the total annual electricity consumption of Peru —according to Qi Ye, the director of the Climate Policy Initiative.

Aside from losses incurred from renewable electricity curtailments, nuclear electricity losses also approached 46.2 billion kWh in 2016, amounting to almost a fifth of generation going to waste. Effectively reducing renewable energy and nuclear power curtailments could save 100 million tons of carbon dioxide emissions each year, Qi said. On the U.S. Environmental Protection Agency’s measure, that would be equivalent to the yearly output of 25 coal plants.

China is also trying to increase the share of electricity sold through market-based mechanisms such as direct sales and centralized auctions, as the country pushes ahead with liberalizing its power sector to cut prices and boost efficiency, with an announcement on this initiative expected by the end of the year.