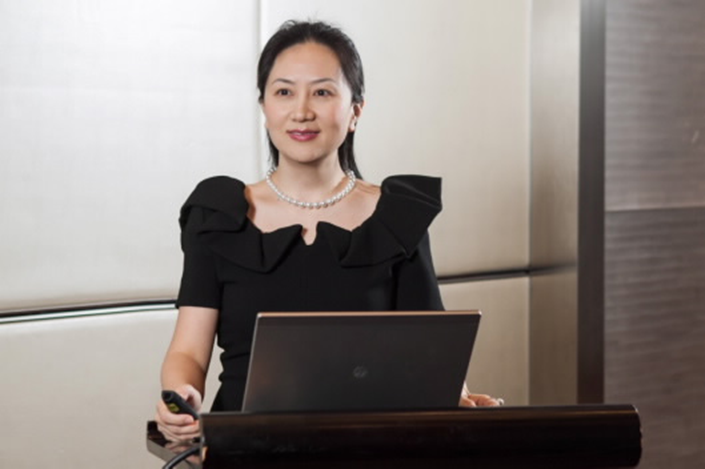 A Canadian courtroom could find itself at the epicenter of tensions between the world’s two biggest economies on Friday, and for months to come, as Washington seeks the extradition of a top executive of China’s Huawei Technologies Co. Ltd. — a move Beijing strongly opposes.

Details remain sparse on the alleged offenses of Huawei CFO Meng Wanzhou as she prepares to attend a bail hearing in the Supreme Court of British Columbia following her Saturday arrest while transiting through Vancouver International Airport. But reports suggest the case relates to alleged violations of previous U.S. sanctions banning the sale of American goods to Iran.

British Columbia-based lawyer Gary Botting, a leading Canadian authority on extradition law, said the court on Friday will assess whether Meng satisfies three criteria for bail — whether she may try to flee, whether she might reoffend, and whether her release might bring the Canadian justice system into disrepute.

Meng, who is also a daughter of Huawei founder Ren Zhengfei, will likely have to surrender her passport and remain in Canada. And regardless of the bail hearing’s outcome, legal experts say the extradition process could last years, if she is ever extradited at all. China on Friday confirmed that Meng is a Chinese national, though it was unclear if she might hold residency rights or citizenship in other jurisdictions.

Under Canadian law, Ottawa can send a suspected criminal to another country where he or she is suspected of wrongdoing if the two countries have an extradition treaty and the individual’s offense is considered a crime in both jurisdictions.

That could become a point of contention in this case due to the nature of Meng’s alleged crime. While Canada has previously implemented Iranian sanctions similar to those of the U.S., it is unclear whether punishment for violations is enforced through its criminal code. The U.S. and Canada have an extradition treaty, although it does not include sanctions violations among its extraditable crimes. But there are provisions for fraud by a corporate officer and receiving proceeds from illegal activity.

U.S. authorities will have 60 days to provide Canada with evidence to justify the extradition request. But the formal extradition process has not yet begun, sources in Canada told Caixin.

Meng could fight the request on jurisdictional grounds, arguing that her actions were not covered by U.S. law as a foreign executive doing business in a foreign country with another sovereign nation. The U.S.-Canadian treaty specifically prohibits extraditions on charges of a “political character,” which could let Meng argue she’s being used as a pawn in the larger ongoing trade war between the U.S. and China.

“Given the attitude of the U.S. in trying to besmirch her reputation, it seems that the U.S. is playing politics. If the extradition is sought for a political reason, Canada does not have to oblige, according to the treaty,” said Botting, giving his personal view that the U.S. was deliberately leaking information on the case.

The extradition trial will focus on the strength of the case in deciding whether to hand over Meng to U.S. authorities. Canada may also ask those who filed the extradition request, in this case the U.S. Department of Justice’s Office of International Affairs, not to pursue any offenses unrelated to the order if granted.

Canada could also refuse to issue an extradition order if it believes the person will not receive a fair trial. Even close U.S. allies often find reasons to turn down extradition requests if they believe the accused won’t be treated fairly. In February, the High Court of Justice in England refused to hand over hacker Lauri Love over mental health concerns. Israel refused to hand over a Jewish man accused of carrying out a hit-and-run murder in 2012 because Florida prisons do not provide kosher food.

Meng is believed to be in custody in the Alouette Correctional Centre for Women in Maple Ridge, British Columbia, about 30 miles east of Vancouver. She was arrested on the day Chinese President Xi Jinping and U.S. President Donald Trump agreed to delay the imposition of higher punitive tariffs in their ongoing trade war for three months to continue talks on a settlement. Yet Meng’s arrest “may derail the trade negotiations between China and the U.S.,” said Jia Wenshan, a professor at Chapman University in California.

The arrest may also harm Canada’s hopes for a stronger relationship with China. On Thursday, Canadian Prime Minister Justin Trudeau sought to distance himself from the proceedings, saying that he was not directly involved, and that it is a judicial rather than government matter.