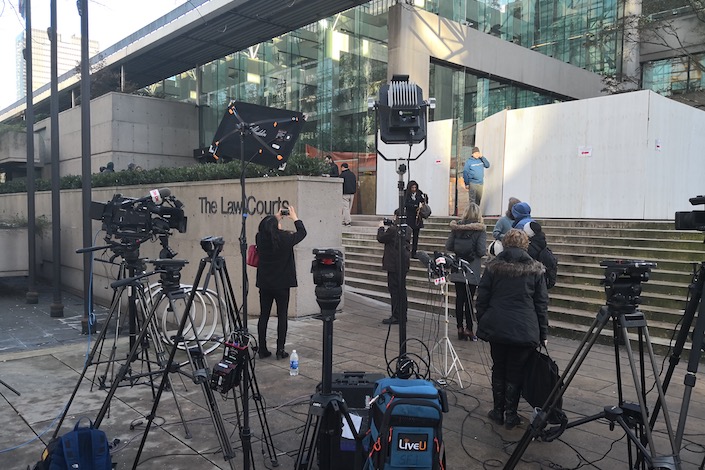 Reporters gather outside the Supreme Court of British Columbia in Vancouver on Friday before the bail hearing for Huawei CFO Meng Wanzhou. Photo: Liu Xiaodong/Caixin

(Vancouver, British Columbia) — A senior executive of Chinese tech giant Huawei Technologies Co. Ltd. — arrested in Vancouver on Dec. 1 — has been accused by the U.S. of fraud in connection with a Hong Kong-based company’s bid to sell American goods to Iran, a Canadian prosecutor said at a bail hearing on Friday.

The hearing, in the Supreme Court of British Columbia, was to determine whether Huawei Chief Financial Officer (CFO) Meng Wanzhou would be released on bail before her extradition hearing. The bail hearing was adjourned until Monday.

Meng appeared in the packed courtroom without handcuffs and wearing a dark green sweatsuit. She was arrested on a provisional warrant on Saturday when transiting in Vancouver International Airport as part of a trip from Hong Kong to Mexico.

Crown counsel John Gibb-Carsley representing the U.S. said Meng is “charged with conspiracy to defraud multiple international institutions,” with each charge carrying a maximum sentence of 30 years in prison.

The counsel alleged that Meng, in her capacity as CFO, misrepresented the relationship between Huawei and Skycom, misleading banks in the U.S. into thinking they were separate companies, and doing business in violation of U.S. sanctions against Iran.

Meng served on the board of SkyCom from February 2008 to April 2009, according to Reuters. In late 2010, SkyCom’s office in Tehran offered to sell at least 1.3 million euros ($1.5 million) worth of Hewlett-Packard Corp. computer equipment to Mobile Telecommunication Co. of Iran, an act that contravened U.S. trade sanctions, the counsel said. At least 13 pages of the bidding proposal were marked as “Huawei Confidential” and carried Huawei’s logo, according to the report. However, the deal did not go through.

Meng, 46, is the daughter of Huawei’s founder and president, Ren Zhengfei, and is seen as his heir apparent. She has an outstanding arrest warrant on fraud charges, issued in New York on Aug. 22, the court heard. The counsel told the court, with many Chinese in attendance, that Meng had intentionally avoided visits to the U.S. since early 2017, thus making her a flight risk given her family’s vast wealth.

Meng’s attorney, David Martin, rebutted that argument, saying that Meng’s daughter lives in Vancouver and that was why she transited in Vancouver rather than in the U.S.

Martin said that Skycom was an independent contractor of Huawei after 2008 although the telecom giant was a shareholder of Skycom from 2002-08, when Meng was a director on the company’s board.

The defense lawyer argued that Meng would not flee if she is granted bail because of the importance of dignity in the Chinese culture. If Meng were to violate a court order, her father and Huawei’s 180,000 employees would be “humiliated and embarrassed,” he stressed.

Meng has strong bonds with Vancouver, and she and her husband own two homes there, he said. To support his argument, the defense lawyer provided many private details of Meng’s current marriage and her children. She had a Canadian Permanent Resident Card that expired in 2009.

She is willing to wear an ankle bracelet to track her whereabouts and use her Vancouver houses as collateral for her bail, he said.

Martin also argued that it would be unfair to deny her bail just because she “has worked hard and has extraordinary resources.”

The high-profile hearing adjourned after a long day on Friday and will resume on Monday.

There was a long line of visitors in front of the court before the hearing and the courtroom was full an hour before it started. As the first order of business, the court lifted the ban on publication of information about the case.

Huawei issued a statement on Friday reiterating the company’s confidence in the Canadian and U.S. legal systems. The firm will closely follow the hearing next Monday, according to the statement.

Meng will have to spend the weekend in the Alouette Correctional Center for Women in Maple Ridge, British Columbia, as the decision on bail was not handed down. Her composure during the hearing impressed many audience members in the courtroom.

“How is this possible in a free and democratic society?” he asked.

The court’s assessment of Meng’s application for a bail is based on three criteria: whether she may try to flee; whether she might reoffend; and whether her release might bring the administration of justice into disrepute.

Meng’s arrest, which took place on the same day that Chinese President Xi Jinping and U.S. President Donald Trump met in Argentina after the G-20 summit, may cast a shadow over the fragile three-month China-U.S. trade truce. It may also harm Canada’s hopes for a stronger relationship with China. On Thursday, Canadian Prime Minister Justin Trudeau sought to distance himself from the proceedings, saying that he was not directly involved and that it is a judicial rather than government matter.