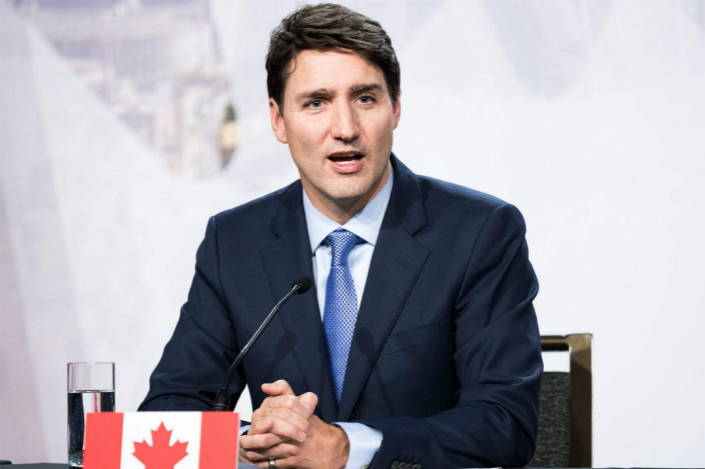 Canadian Prime Minister Justin Trudeau at a meeting in Montreal earlier this month. Trudeau confirmed an unnamed Canadian had been arrested in China. Photo: VCG

(Bloomberg) — A former Canadian diplomat has been detained in China — a potentially explosive development in the aftermath of the arrest of a top Huawei Technologies Co. executive in Vancouver.

The ex-diplomat, Michael Kovrig, who works now with the International Crisis Group, was reported detained in China Tuesday. Prime Minister Justin Trudeau’s government responded to questions about his case by confirming a Canadian had been arrested, though stopped short of identifying him. His employer said it was seeking more information.

“What we know is a Canadian is obviously in difficulty in China,” Public Safety Minister Ralph Goodale told reporters in Ottawa. “We’re obviously aware of the situation and we are deeply concerned.”

China’s foreign ministry responded Wednesday to questions about Kovrig at a regular press conference, saying it was unable to provide information regarding reports of his disappearance.

But foreign ministry spokesperson Lu Kang added that, to his understanding, Kovrig’s employer International Crisis Group had not registered itself in China, and that if this was indeed the case, its staff were breaking a recent Chinese law on NGOs by working in the country, Beijing Youth Daily reported.

It remains to be seen if Kovrig’s detention is linked to Canada’s arrest of Huawei Chief Financial Officer Meng Wanzhou this month; Goodale said there is “no explicit indication of that at this point.” The Chinese executive was freed on bail on Tuesday at the end of a hearing that lasted three days ’in Vancouver.

The situation adds to a brewing feud between China and Canada, which detained Meng after a request from U.S. authorities. Chinese officials have expressed outrage over her arrest and observers have warned about the risk of retaliation.

Foreign Minister Chrystia Freeland left a cabinet meeting earlier Tuesday without commenting on the Kovrig case. Trudeau later confirmed to reporters outside the legislature that his government has raised it directly with Chinese officials. “We are engaged on the file, which we take very seriously,” the prime minister said. “We are of course providing consular assistance to the family.”

Kovrig is based in Hong Kong and worked previously as a diplomat in Beijing and at the United Nations in New York before joining the Brussels-based think tank and consultancy last year. “We are doing everything possible to secure additional information on Michael’s whereabouts as well as his prompt and safe release,” the International Crisis Group said in a written statement. A spokeswoman declined further comment.

Trudeau’s government distanced itself from Meng’s detention, saying Canada’s justice system is independent and there wasn’t any political involvement in the case. Freeland said Monday the Huawei case is being handled under domestic and international law and it’s not appropriate for Canadian politicians to interfere.

China may attempting to take a stand without directly inflaming trade talks with the U.S., according to John Higginbotham, a fellow at Carleton University’s Norman Paterson School of International Affairs in Ottawa.

“The idea that there is retaliation against a Canadian citizen, unwarranted retaliation, will make it even more difficult for the Canadian government to squirm its way out of this situation that the United States has presented us with,’’ Higginbotham said by phone.

“We are really in a very difficult position,” he said. “The elephants are charging each other and watch out for Canada.’’

Kovrig’s LinkedIn page says in 2016, while working for Canada’s global affairs department, he helped organize a trip to Hong Kong by Trudeau.

The International Crisis Group calls itself “an independent organisation working to prevent wars and shape policies that will build a more peaceful world.” Its website says Kovrig is a senior adviser specializing in China, Japan and the Korean peninsula, and provides advice on foreign affairs and global security issues.