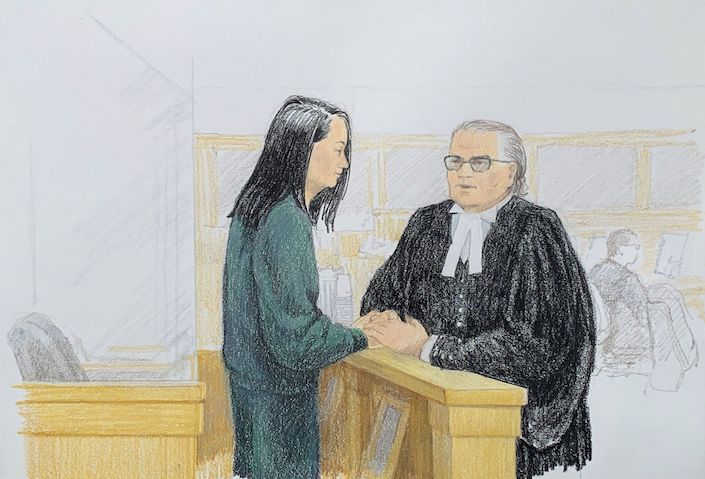 Meng, 46, who is also the daughter of Huawei’s founder, was arrested on Dec. 1 by the Canadian Security Border Agency at the request of the U.S. government while she was changing flights in Vancouver en route from Hong Kong to Mexico. Meng faces fraud charges involving alleged violations of U.S. sanctions on Iran.

British Columbia Supreme Court Justice William Ehrcke ruled on Tuesday afternoon that Meng could be released on Can$10 million bail ($7.46 million), including a cash deposit of 7 million.

The judge said he was satisfied that Meng would surrender her two valid passports, adding that she had other passports that were “replacements for valid reasons.”

The U.S. Department of Justice issued a statement after the hearing last Friday, claiming that Meng was a flight risk partially because she had held at least seven passports in the past 11 years.

Ehrcke ruled it was “speculative and without reliable foundation” that Meng was trying to avoid the U.S. to escape criminal investigations.

On Monday, the second day of the hearing, Gibb-Carsley argued that Meng had not visited the U.S. since early 2017, indicating that she deliberately avoided the country due to fraud investigations.

Martin rejected the claim, saying that there was no need for Meng, as a businesswoman, to visit America because the U.S. did not want to do business with Huawei.

Other bail conditions for Meng included residing in her house on West 28th Avenue, with a curfew from 11 p.m. to 6 a.m.

The judge ordered Meng to return to the court on Feb. 6.

The U.S. government has 60 days to file a formal extradition request. If it fails to do so by early February 2019, Meng must be released, the judge said.

At the end of the hearing on Monday, the suitability of Meng’s husband Liu as her sole surety, or the jailer of the community, was questioned by the prosecutor. Liu is a visitor to Canada and lives in Canada for only a few weeks each year, the court was told.

“I’ve thought of many things but not that question. I haven’t actually checked his visa,” Martin told the court. That caused the hearing to run to a third day.

On Tuesday, Martin said that Liu could theoretically extend his stay in Canada until 2024. He is a venture capitalist and can work from anywhere in the world, the defense lawyer added.

The defense team introduced four more sureties, including Meng’s realtor, neighbor and old friends who live in Vancouver. Meng’s neighbor pledged a check of Can$50,000 that came from her retirement savings.

Meng said in her affidavit that she maintains that she is “innocent” and she wants to stay in Vancouver and do a doctorate program while fighting extradition.

The bail package approved by the judge also included a restricted area that would prohibit Meng from traveling to Vancouver International Airport.

A security team, consisting of one security driver and two security officers on three eight-hour shifts, equipped with one security vehicle, would supervise Meng’s movements.

After spending 10 nights in the Alouette Correctional Centre for Women in Maple Ridge, about 30 miles east of Vancouver, Meng finally could live in her Can$5.6 million home in the city.

The packed courtroom has been the epicenter of the international blockbuster case for the past few days. Although the bail hearing ended on a high note, Canada’s relationship with China was clouded by the arrest of a former Canadian diplomat.

The Canadian government said Tuesday that Michael Kovrig, currently a senior advisor for International Crisis Group, was detained in China. Beijing has neither confirmed nor denied this.

Canada’s Prime Minister Justin Trudeau has sought to distance himself from the proceedings, saying that Canada has an independent judiciary. He reiterated that his nation had good relations with China on Monday as the bail hearing entered its second day.

Meng’s arrest, which took place on the day when Chinese President Xi Jinping and U.S. President Donald Trump met in Argentina during the G-20 summit, has also cast a shadow over the fragile three-month China-U.S. trade truce. The U.S. government is trying to downplay the significance of the arrest, by saying it was separate from ongoing bilateral tariff talks.

Also on Tuesday, Trump said in an interview with Reuters that he would intervene with the U.S. Justice Department in the case of Meng if it would help secure a trade deal with China.