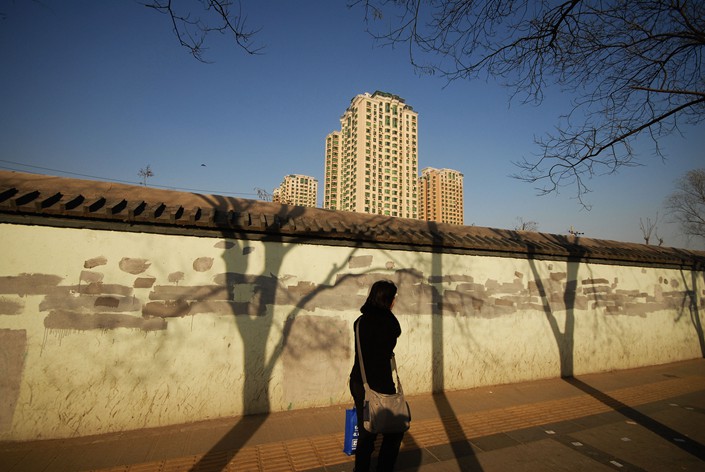 A residential building is seen near the northern section of Beijing’s Third Ring Road on Monday. Photo: VCG

* The average sales price of a previously owned home in China’s four first-tier cities fell 0.4% from the previous month

(Beijing) — Four of China’s biggest cities have posted a drop in the average price of an existing home for the third straight month in November, indicating mounting pressure on the nation’s property market, government data showed Saturday.

The government has not loosened its grip on the market and maintains tough measures that aim to curb speculation despite evidence of cooling and broader signs of a slowing economy.

In November, the average sales price of a previously owned home in China’s “Big Four” first-tier cities fell 0.4% from the previous month, according to data (link in Chinese) from the National Bureau of Statistics (NBS). In September and October, this price fell 0.1% and 0.2% respectively.

Beijing led the drop. It saw a monthly decline of 0.6% in the average price of an existing home in November, compared to a 0.2% decline the previous month, official data showed. Shanghai, Guangzhou and Shenzhen recorded monthly drops of 0.1%, 0.3% and 0.2% respectively.

Among the 70 cities that the NBS includes in the report, 17 saw the price of pre-owned houses drop month-on-month. That was up from seven cities in September and 14 in October.

As opposed to new-home prices, which are heavily regulated as part of local government efforts to control property prices, “the prices of existing homes can better reflect the actual market situation, especially for the first- and second-tier cities,” said Zhang Dawei, chief analyst at Centaline Property, in a research post (link in Chinese). “The sales volume of existing homes in Beijing and Shanghai each accounts for over 80% of all home sales.”

Many economists expect the market’s downward trend to continue next year. Some said that policymakers were likely to relax controls on the sector to allow some breathing room.

“Given the key role the property sector plays in driving growth, we believe Beijing will be pragmatic and eventually ease these distortionary interventions during or after the spring of 2019,” Nomura analysts said.

For next year, some degree of relaxation in regulations in some cities may halt further deceleration in property investment, analysts with Goldman Sachs said in a recent report.

“We do not expect a significant pickup in property investment growth, as a full relaxation of property restrictions would risk undermining the credibility of the government’s push against housing speculation,” they said.

Despite the cooling outlook, regulators have shown no sign of loosening their hold. A state media commentary (link in Chinese) in October said that “the government will not lose its resolve to curb growth in property prices.”

In other industries, authorities have already eased a drive that aims to cut debt levels. They have launched a campaign to rescue troubled private firms, and asked local officials to speed up bond sales to fund infrastructure investment.

China’s top policymakers are set to gather soon for an annual conference that will set economic policies for next year. It remains to be seen whether property policies will be addressed.