India Offers $1.4 Billion to Maldives Amid Tussle With China 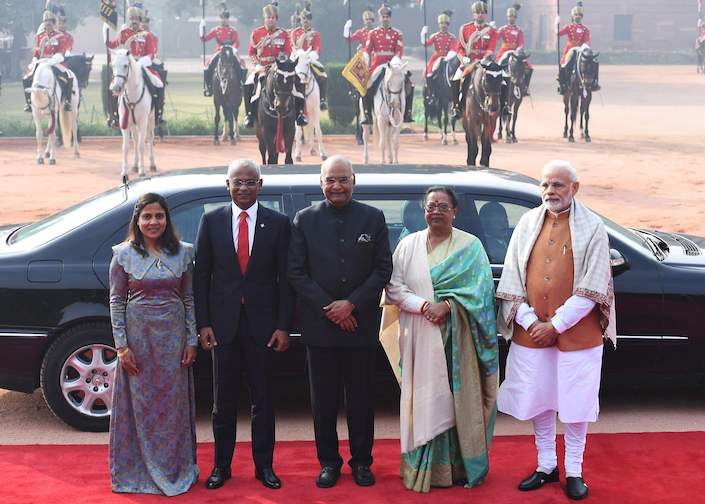 India has offered the Maldives $1.4 billion through a credit line and budgetary support as the tiny island nation’s new government pivots from a pro-China foreign policy to one focused on its close neighbor India.

The Maldivian leader made the visit as his nation reels from debt accumulated under the previous administration of pro-China strongman Abdulla Yameen, who had pursued close ties with Beijing -- including a trade deal -- and had alienated India. The numerous loans from China were similar to other countries in the region including Sri Lanka and Pakistan.

"Both nations are committed to the peace, stability and security of the Indian Ocean region," Modi said in New Delhi on Monday. "Both nations have agreed not to allow their territory to be used against each other’s interests."

In late September, the tiny nation of about 400,000 people voted Yameen out of office in a surprise election result that took on broader geopolitical significance as China’s Belt and Road infrastructure-building initiative was generating anxiety in the region and in Washington.

China has spent years building ports, roads and other infrastructure across the Indian Ocean, including the $1 billion Hambantota port in Sri Lanka it recently took over in a debt-to-equity swap.

New Delhi is particularly concerned about China’s investments in its neighborhood, in part because Beijing is financing infrastructure projects valued at about $60 billion across Pakistan, including in parts of disputed Kashmir that both New Delhi and Islamabad claim as their territory.

More recently, however, Pakistani militants attacked the Chinese consulate in the business hub of Karachi, killing seven people, while other governments -- including Malaysia -- reconsider or postpone projects because of concerns about their cost.

A visiting group of Maldivian ministers had previously pledged to pursue an " India first" foreign policy when they visited New Delhi in late November.

The country was seeking a credit line of around $1 billion at a concessionary rate of 1.5 percent and $200 million in "grant money" for budgetary support, Maldivian Finance Minister Ibrahim Ameer said at the time.