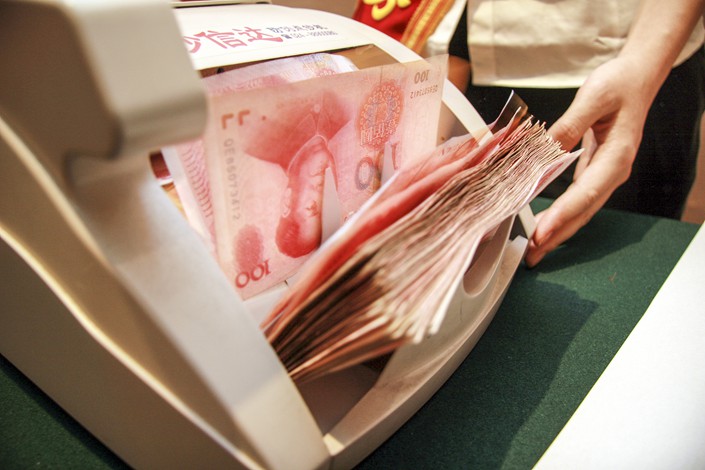 More monetary policy loosening is expected after China announced the creation of a new tool to encourage lending to small and private enterprises. Photo: VCG

China’s central bank is likely to implement more monetary loosening in the wake of this week’s unveiling of a new tool to encourage lending to small and private enterprises, and a less hawkish stance by the U.S. Federal Reserve gives it more leeway to focus on supporting domestic growth, analysts said.

The People’s Bank of China (PBOC) unveiled (link in Chinese) the targeted medium-term lending facility (TMLF) on Wednesday, which will offer credit at preferential interest rates to major commercial banks specifically to lend to private and small businesses. The measure, interpreted by some analysts as essentially a targeted rate cut, came hours before the Federal Reserve’s widely expected announcement of a quarter-point increase in its benchmark interest rate.

The PBOC also said it would hand out 100 billion yuan ($14.5 billion) in new relending and rediscount quotas to support lending by smaller banks to private and small companies, after adding a total of 300 billion yuan to the program in June and October.

The measures indicate the central bank is stepping up monetary support for the economy and further action is likely next year. That view was reinforced on Friday in a statement (link in Chinese) issued after the close of the three-day annual Central Economic Works Conference, where top leaders map out economic policies for the coming year.

The meeting indicated that monetary policy next year will be aimed at ensuring abundant money supply, according to the statement. “The stable monetary policy will strike a balance between loosening and tightening so that reasonably ample liquidity is maintained,” it said.

Policymakers have made repeated efforts to incentivize lending to small and privately owned businesses who are often shunned by the formal banking system because they lack collateral and don’t have implicit state support. The government also wants to make more funds available to banks to buy government bonds to finance infrastructure investment, analysts said.

“For now, this new policy tool is best seen as a sign that the PBOC remains in easing mode, with further support measures likely to follow,” economists Julian Evans-Pritchard and Mark Williams at research firm Capital Economics said in a note on Friday.

But they cautioned that the impact of the TMLF will depend on the scale of cash injections made via the facility. The central bank has not disclosed the amount of money it intends to unleash through the TMLF, which will be offered at a rate of 3.15%, 15 basis points lower than the rate it charges on its ordinary MLF loans. It hasn’t specified when banks can start applying for loans and details are sketchy on the criteria banks will have to meet to receive the TMLF.

The need for more monetary easing is likely to spur the PBOC to imminently lower the reserve requirement ratio (RRR) — the amount of money banks must keep at the central bank and which can’t be lent out — and reduce interest rates on the money it injects into the financial markets through open market operations (OMO) and other more standard lending facilities.

Cutting the RRR will add liquidity into the interbank market, which is the main source of funding for banks and financial institutions, to meet a surge in demand for cash ahead of the Lunar New Year, which falls on Feb. 5. Banks are the biggest buyers of central and local government debt and a cut in the RRR will provide additional money for them to stock up. Government debt is expected to surge next year as the authorities seek to stimulate the economy by continuing to cut taxes and spending more on infrastructure investment even as the increase in fiscal revenue slows as a result of softening economic growth.

Tax reductions along with sharp declines in corporate profit growth and cooling land and property sales will leave a combined “funding gap” of more than 3 trillion yuan at central and local government levels next year, economists at Chinese investment bank CICC estimate.

“In our view, policymakers will likely bridge the gap by expanding the quota for government and quasi-government bond issuance by a considerable amount,” they wrote in a report published Thursday. “Historically, monetary policy usually loosens in years of fiscal expansion of this size, in order to safeguard the issuance of large-scale government bonds,” they said, pointing to 1998, 2009, and 2015 as examples.

“Therefore, we see the ‘preferred’ interest rate cut offered for TMLF as a prelude to a reduction in OMO rates,” they said. The interest rate on the benchmark seven-day reverse repo in the interbank market currently stands at 2.55%, after being raised by 5 basis points in March.

CICC analysts also predict at least 200 basis points of cuts to the RRR over the coming year. The ratio, which has been cut four times this year, is now at 14.5% for the largest banks and 12.5% for smaller lenders.

The standing committee of the National People’s Congress (NPC), the country’s top legislature, is scheduled to discuss at meetings starting Sunday issues including the early approval of some local government bond quotas for next year. That has fueled expectations that debt sales will take place earlier than usual next year, underscoring the urgency felt by policymakers to support economic growth.

Describing the PBOC’s Wednesday announcement as “small additional” easing, Goldman Sachs analysts forecast “further loosening measures which we expect will continue to be incremental and conditional on the changes in the economy” in the coming months.

Although lowering interest rates in the interbank market is “easily justifiable in light of weak growth and lower inflation,” the authorities are unlikely to do so, they said.

“(T)here seems to be significant determination to maintain currency stability because of the ongoing trade negotiations and concerns about the effects on the financial markets and economy,” they wrote. “Lowering interbank interest rates would put additional pressure on the currency.”

The PBOC is known to be concerned that yuan depreciation could fuel capital outflows.

Other analysts say the PBOC has more room to maneuver on interest rates now that the Fed has lowered its projection for U.S. economic growth next year and cut its forecast for further rate hikes in 2019 to two from three. That could make the dollar less attractive to investors and ease the weakening pressure on the yuan.

“Once the U.S. Fed … stops hiking interest rates or even starts to consider monetary easing when economic growth and inflation in the U.S. slow, the strong dollar will see a correction and the pressure on the yuan’s exchange rate will soften,” fixed income strategists at CICC said in a report Wednesday. “That will give room for the Chinese central bank to continue to guide interbank rates down.”