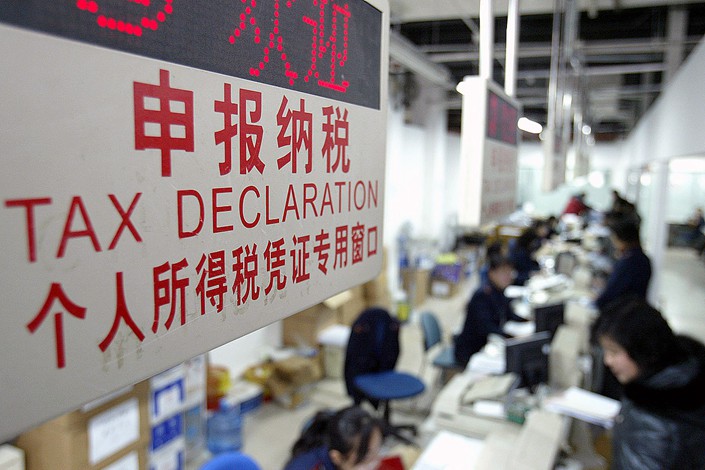 A sign marking where individuals in Shanghai can go to declare income tax. Photo: VCG

* Under the revised regulation, expats can avoid paying income tax on global income if they leave the mainland for more than 30 days once every six years

(Beijing) — China has revised a regulation to allow expatriates to leave the country less often than expected to avoid paying local taxes on their global income, after a newly amended law raised concerns that foreign workers might shun the country over fears of more taxes.

China’s revised Individual Income Tax Law that will take effect Jan. 1 had shortened the time anyone could spend in China before being considered a resident. Following the change, people who stayed more than 183 days each year would be considered a resident — a classification that could subject the person’s global income to Chinese taxes — versus one year previously. The new tougher limit, which was in line with practice used by countries such as the U.S. and U.K., sparked concerns that China’s taxation system would become less attractive to foreigners and even drive many to leave.

Under the current system, foreigners living in China for more than a year could leave the country every five years for a period of more than 30 consecutive days to avoid paying taxes on their offshore income from overseas sources. That condition was included in a draft (link in Chinese) of the regulation released in October for public comment.

A regulation (link in Chinese) governing implementation of the law essentially exempts foreigners whose annual stay in China exceeds the 183-day limit from paying taxes on their offshore income from overseas sources, as long as they leave the Chinese mainland at least once every six years for more than 30 days. The regulation, published on the website of the State Council, or cabinet, on Saturday, will take effect from Jan. 1.

The lengthening of the number of years between 30-day exits to six from five underscored Chinese authorities’ intention to “attract talents and keep them (in China),” a personal income tax expert with an international accounting firm told Caixin. “So far (the changes in rules) do not seem to have major negative impact,” she said. But she cautioned that a few matters remain unclear in the latest regulation, such as whether and how the time foreigners had already spent in China before the new rule takes effect should be counted under the new system.

She expects the government to issue a separate rule specifically governing foreign workers’ tax reporting under the new system.