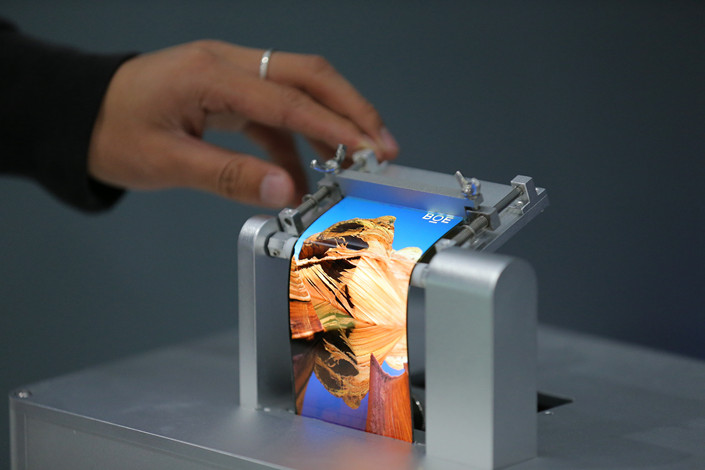 * New plant will make sixth-generation AMOLED display substrates with a designed capacity of 48,000 per month

* Facility will complement previously announced ones in Sichuan province and Chongqing

(Beijing) — BOE Technology Group Co. Ltd., a maker of display panels used in flat-screen TVs and smartphones, said it will build a multibillion-dollar plant in East China’s Fujian province as it looks to become a leader in the cutting-edge area known as AMOLED.

Investment for the plant in the provincial capital of Fuzhou will total 46.5 billion yuan ($6.74 billion), BOE said in a statement (link in Chinese) to the Shenzhen Stock Exchange dated Thursday. The factory will be built by a company jointly invested by BOE and the local government. That company will have 26 billion yuan in registered capital, with 56.5% coming from the government and the remainder from BOE.

BOE is at the forefront of an emerging group of Chinese makers of display panels that are a central component of a growing array of gadgets, including flat-screen TVs, smartphones, digital cameras and other portable devices. The most cutting-edge of those are active-matrix organic light-emitting diodes, or AMOLEDs, which consume less power than traditional liquid crystal displays (LCDs). They are also extremely thin, meaning some can even be rolled up and folded.

The new plant will make sixth-generation AMOLED display substrates measuring 1,500 millimeters by 1,850 millimeters, with a designed capacity of 48,000 per month. Panels made from such substrates are used in high-end smartphones, as well as other higher-end mobile devices. The new plant will complement an existing BOE facility in Fuzhou engaged in the manufacture of traditional LCD displays.

Beijing and local governments are providing generous incentives and other support to nurture the industry, as China seeks to move up the value chain into high-tech products with bigger margins than its traditional strength in manufacturing. But a rapid build-up of the sector in recent years has led to a global supply glut and weak prices.

The plant will be the fourth AMOLED manufacturing site for BOE, complementing previously announced facilities in the cities of Chengdu and Mianyang, both in Central China’s Sichuan province, as well as in the nearby province-level municipality of Chongqing. The Fujian plant will help to consolidate BOE’s spot as the leading Chinese maker of AMOLED displays, with the company owning four the nation’s nine production bases. Each of the other five is owned by a different company.

BOE’s strategy of opening factories in such a wide range of locations may be designed to take advantage of generous subsidies from governments that want to promote their local high-tech sectors, according to a senior executive at a domestic manufacturer. But he added that future developments could see the sector consolidate around a smaller number of locations, which would bring better economies of scale and also help to concentrate the many specialist suppliers to such manufacturers, he added.