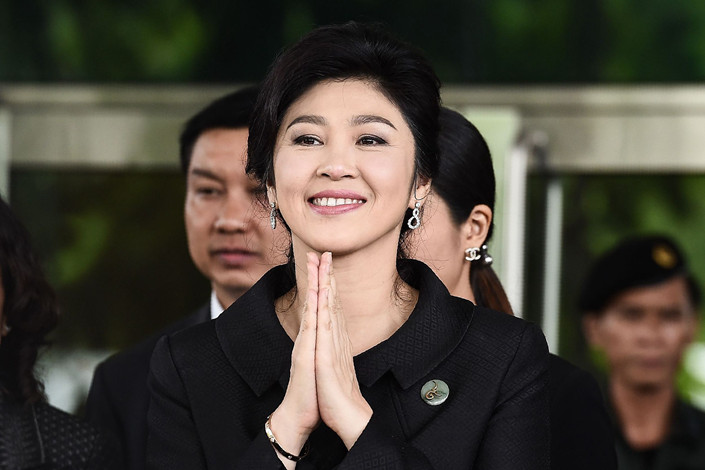 * Two of SICT’s new directors are Ying Shiying, a SingHaiyi Group Ltd. company director, and Celine Tang, the company’s CEO, who along with her husband, Gordon Tang, hold a majority stake in SingHaiyi

(Beijing) — A controversial Singapore-based businesswoman with ties to the U.S.’ Bush family is one of the new directors of a Guangdong-province-based port operator now chaired by a former prime minister of Thailand, Caixin has learned.

The makeup of the new board of directors is one of the details to emerge about the unusual web of connections among the people behind Shantou International Container Terminals Ltd. (SICT) since it came under new ownership late last year.

Until November, SICT was 70% owned by Hutchison Port Group Co. Ltd., part of the sprawling empire built by Hong Kong’s richest man, Li Ka-shing, who retired in March. A Hutchinson representative confirmed to Caixin that it has divested its 70% stake in SICT “to a Singaporean investor who has subsequently brought in other investor(s) to the terminal.”

According to Hong Kong Companies Registry, the company has six new directors, with only one, Lin Daqi, registering a Singaporean passport for this particular deal. The registry shows that Lin became SICT’s chairman and legal representative on Nov. 21. Yingluck Shinawatra, Thailand’s prime minister from 2011 to 2014, took over both positions on Dec. 12, although the exact process and relationship between the parties remains unclear.

Lin is the director of several subsidiaries of Singapore-listed real estate company SingHaiyi Group Ltd., according to a Singapore company registration document obtained by Caixin. The other directors that Lin appears to have brought in include Ying Shiying, a SingHaiyi company director, and Celine Tang, the company’s CEO, who along with her husband, Gordon Tang, hold a majority stake in SingHaiyi. The Tangs are originally from Chaozhou, a city in Guangdong next to Shantou, where SICT is based, although they now hold Singaporean passports.

Earlier this week, sources at SICT confirmed that Yingluck has served as its chairwoman and legal representative since December despite her apparent lack of experience in the industry.

In another unexpected connection, Neil Bush, brother of former U.S. President George W. Bush and a son of the late former President George H.W. Bush, is the nonexecutive chairman of both SingHaiyi and American Pacific International Capital Inc. (APIC), according to SingHaiyi’s website.

APIC has snapped up several commercial properties in the U.S. in recent years and operates several high-rise residential developments and two luxury hotels in Shantou, its website said.

According to the Hong Kong Companies Registry and on-site confirmation by Caixin, the registered address of Hutchison Ports Shantou, SICT’s major shareholder, has been changed to one owned by Pacific International Capital Ltd. It was previously registered to the similarly named APIC, although Caixin cannot say for certain if they are the same entity.

In 2016, investigative news site The Intercept reported that Celine Tang and her husband had used their wealth to forge ties with several U.S. politicians. The report noted that former U.S. Ambassador to China Gary Locke was working with SingHaiyi. APIC made a seven-figure donation to former Florida Governor Jeb Bush’s failed campaign to secure the Republican presidential nomination that year. Jeb Bush is Neil’s brother.

The report also noted that in 2013, SingHai reported in a filing with the Singapore stock exchange that in 2001 and 2002, the import/export business related to Gordon Tang was investigated as part of a “sectorwide” probe into misconduct at the port of Shantou. While several members of his staff were convicted of crimes and some of his business assets were seized, Gordon Tang himself was not penalized or convicted.

The exact nature of the relationship between Yingluck and Singhai remains unclear, beyond the fact that she became SICT’s chairman after the investors acquired the 70% stake in the company from Hutchison.