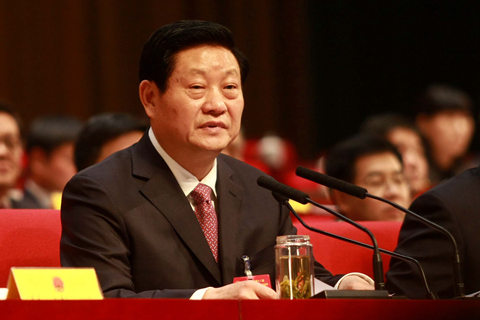 A former chief of Northwest China’s resource-rich Shaanxi province has become the latest target of the central government’s sweeping anti-corruption campaign and the first senior official to fall from grace this year.

Zhao Zhengyong, a former provincial Communist Party chief and former governor of Shaanxi who first made a name for himself in provincial law enforcement, has been placed under investigation on suspicion of “serious violations in law and discipline,” the ruling party’s top anti-graft watchdog said late Tuesday in a statement. The phrase often refers to corruption.

Zhao was also allegedly involved in a recent high-profile scandal at the Supreme People’s Court, in which he was said to have colluded with a senior judge to influence the verdict in a mining dispute that reportedly involved hundreds of billions of yuan.

The probe into Zhao sent a shockwave through officialdom in Shaanxi, one of China’s ancient cultural centers and a major source of coal and iron. The province has become an epicenter for the corruption crackdown and witnessed the fall of at least eight senior officials over the past few years, including a former deputy provincial party chief, a former deputy governor and a former deputy of the provincial legislature.

The investigation came less than a year after Zhao retired as a deputy chairman of the Internal and Judicial Affairs Committee under the National People's Congress, China’s parliament. He was the governor of Shaanxi between 2011 and 2012 and the province’s party chief from December 2012 to March 2016. Zhao pressed for economic development of the province and initiated the relocation of 3 million people from poor or dangerous mountain areas.

The graft buster’s announcement of the Zhao investigation didn’t provide any details. But Caixin learned that the probe involves allegations of intervening in a mining dispute that set off a probe this month of the Supreme People’s Court, neglect of duty and links with disgraced official Wei Minzhou.

Wei, deputy director-general of the Standing Committee of the Shaanxi Province People’s Congress until May 2017, was sentenced in November to life in prison for accepting bribes totaling more than 109 million yuan ($15.7 million).

Several sources close to the Shaanxi government said Wei was a close ally of Zhao and sent bribes to him. Speculation on Zhao has grown since the detention of Wei in mid-2017, sources said.

The Supreme People’s Court was accused of losing important documents in a long-running dispute between a private business and a state-owned company on a mining project in Shaanxi. The documents, which disappeared from a court office in late 2016, stirred a public outcry after a prominent former television host, Cui Yongyuan, revealed the case on China’s popular social media platform Weibo in late December. It triggered an investigation of the Supreme Court led by the country’s top law enforcement watchdog.

The missing document is important for carrying out a court ruling in the dispute between the private company, Kechley Energy Investment, and the Shaanxi government-backed Xi’an Institute of Geological and Mineral Exploration over mining rights in a coal project worth nearly 380 billion yuan. The dispute has gone through different levels of courts since 2006 and has yet to be fully settled.

Zhao, then deputy governor of Shaanxi, was accused by Kechley’s owner, Zhao Faqi, of meddling in the case in concert with then-Vice President of the Supreme Court Xi Xiaoming to favor the Xi’an institute. Zhao Faqi asserted that he was arrested and probed by local police under Zhao Zhengyong’s order.

In 2015, Xi Xiaoming was investigated for corruption and later expelled from the Communist Party. In late 2017, the Supreme Court ruled that the Xi’an institute breached a contract with Kechley. But the court didn’t clarify Kechley’s ownership in the project, leaving the case only partially resolved.

Born in Anhui province, Zhao Zhengyong started his career in a local government-owned steel company in Maanshan, one of China’s major steel hubs. He rose to leadership of the steel maker and then was promoted to the local government in early 1980s.

A crucial moment of Zhao’s bureaucratic career was in 2001 when he left his hometown to head law enforcement in the provincial government of Shaanxi. He was lauded for taking a hard-working and pragmatic approach to managing the local police system.

In 2005, Zhao was appointed deputy governor of Shaanxi and became governor in 2011. During his tenure, Zhao pressed Shaanxi to develop its energy, machinery and technology sector to catch up with growth of wealthier provinces.

He also initiated a massive relocation project involving nearly 3 million people from poor mountainous areas that are prone to natural disasters, more than the population affected by the Three Gorge project that was jointly handled by several provinces.

In 2012, Zhao became a member of the 18th Central Committee of the Communist Party, a 205-member power nexus. The same year, he was promoted to party chief of Shaanxi.