By Leng Cheng and Liu Caiping 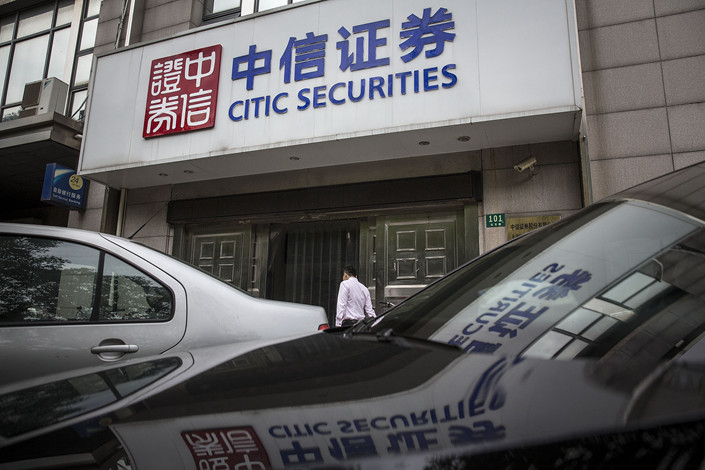 The Shanghai branch of Citic Securities is seen on Sept. 16. Photo: VCG

* Some investors question the rationale for the purchase of a small, money-losing state-owned brokerage

(Shanghai) — Citic Securities Co. Ltd., one of China’s largest brokerages, has defended its proposed 13.46 billion yuan ($1.98 billion) acquisition of a struggling regional securities firm, saying the deal will expand its presence in a key area of southern China.

In a Jan. 21 response to a request from the Shanghai Stock Exchange for more information on the deal, Citic Securities said the purchase of money-losing Guangzhou Securities Co. Ltd. would significantly strengthen its competitiveness in five southern provinces, mostly Guangdong, by adding 42 branches and outlets to Citic’s network of just 21. Guangdong has long been a “key area for the company to seek for breakthroughs and further development,” it said, pointing to its position as the biggest province in terms of economic output and trade, and the overall size of its securities brokerage business.

The company blamed Guangzhou Securities’ deteriorating finances on the government’s macroeconomic policies, the poor performance of the stock market, and weak risk control, and said synergies resulting from the acquisition along with Citic Securities’ strengths in securities research, product development and risk control would turn the company around.

State-owned Citic Securities, which is listed in Shanghai and Hong Kong, announced on Dec. 24 that it was planning to buy Guangzhou Securities from Guangzhou Yuexiu Financial Holdings Group Co., which is controlled by the Guangzhou government. In a subsequent statement on Jan 9, it said it would pay as much as 13.46 billion yuan for the company and fund the deal through the issue of A-shares at 16.97 yuan a share. That compares with a price of 16.01 yuan on Dec. 24, when the shares were suspended. The stock resumed trading on Jan. 10 and closed on Tuesday at 17.47 yuan.

But the acquisition, which will give the Yuexiu Group an overall 6.14% stake in Citic Securities, has aroused controversy in the market, with investors questioning the rationale for the purchase of a small, money-losing state-owned brokerage — Guangzhou Securities’ assets amounted to 11 billion yuan as of Nov. 30, less than 10% of Citic Securities’ assets — and the relatively high valuation.

Founded 30 years ago, Guangzhou Securities reported a 119 million yuan loss in the first 11 months of 2018, compared with a profit of 239 million yuan in 2017, partly due to slumping trading volumes as a bear market put brokerages under pressure. The company has also been punished for three major violations of securities regulations since 2015, including insufficient internal management control and unfair competition.

Yuexiu Financial bought out minority shareholders of Guangzhou Securities last year in transactions that valued the company at 19.1 billion yuan, according to Citic Securities.

Sources with knowledge of the matter said Yuexiu was keen to offload Guangzhou Securities because it was making losses, and started to negotiate with several brokerage firms last year. But potential buyers were not especially interested, given the industry’s slumping profits and the downturn in the stock market.

In addition to building its business presence in Guangdong, Citic Securities was also motivated to buy the brokerage to help build closer ties with the Guangzhou government, sources inside the company who declined to be identified told Caixin. It agreed to the purchase on condition that it excluded two divisions — the futures operation and fund management business — valuing the remainder of Guangzhou Securities’ business at around 13.5 billion yuan.

Although the Shanghai Stock Exchange asked Citic Securities to assess the impact of the deal on its credit ratings, a report from S&P Global Ratings said that as the deal was equity-financed, there would at this stage be no rating implications.

S&P analysts Phyllis Liu and Fern Wang said the deal was an early sign that China's securities industry is becoming more open to consolidation, a trend that will place underperforming local and regional players under more pressure, particularly those that rely heavily on retail business, and have aggressive proprietary trading positions.