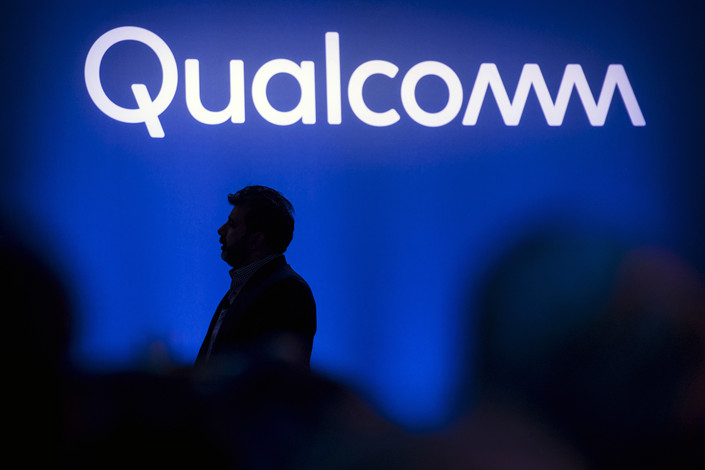 Qualcomm Inc. Senior Vice President Mark Snyder said he is “surprised that Apple is being disrespectful of the Chinese court system.” Photo: VCG

(Beijing) — Qualcomm Inc. has hit back at Apple Inc., accusing the latter of failing to comply with an injunction issued by a Chinese court that banned the sales of certain iPhones in the market.

In an exclusive interview with Caixin, Mark Snyder, the chip giant’s patent counsel and senior vice president, rejected Apple’s claim it has complied with the court’s ruling and denied accusations that Qualcomm has threatened to cut off chip supplies during negotiations over the payment of licensing fees.

His comments came after Apple’s chief litigation counsel, Noreen Krall, told Caixin last week that the chipmaker was holding smartphone-makers to “ransom” through the bundling of patent fees with chip sales, and that Qualcomm’s claim Apple hadn’t complied with the sales ban is “misleading.”

The two U.S. tech giants have been locked in a worldwide dispute over licensing fees ever since Apple filed a lawsuit against Qualcomm in January 2017 in the United States. Apple has argued that Qualcomm leverages its position as the world’s biggest supplier of chips for smartphones to force payment of unfair royalties. Qualcomm has countered that Apple is using its intellectual property without paying for it, and the lawsuits are aimed at forcing the chipmaker to lower licensing fees.

Qualcomm earns most of its profits by licensing patents to handset-makers, using a royalty formula based on a percentage of the phones’ wholesale price. Apple has argued that the royalties should be based instead on the price of the component, a difference of hundreds of dollars per handset.

The spat spread to China last month, when a court in Fuzhou, Fujian province, ruled Apple was infringing on two Qualcomm patents, and issued injunctions against the sale of six older versions of the iPhone in the market. Only older iPhones are covered by the ruling because Apple doesn’t use Qualcomm’s chips in its newest models.

“I’m surprised that Apple is being disrespectful of the Chinese court system and the rule of law by not complying with the Fuzhou court order,” Snyder said. “They should have complied immediately, and I personally do not believe the things that they said … (that) they’ve taken steps to comply.

“We have evidence to show that, in fact, they have not complied as they said they have, and we will seek to push to enforce,” he added. “In order to have strong IP (intellectual property) rights, you have to have strong enforcement.”

Krall said the alleged patent infringement in China regards two features of Apple operating system iOS, rather than the hardware itself. Krall claimed that Apple recalled phones covered under the Fuzhou ruling and removed the technology that infringed on Qualcomm’s patents.

Apple in January lowered its revenue outlook for the first time in two decades, citing fewer-than-expected customer upgrades to new iPhones, and weakness in China’s economy. China is critical to Apple — one-fifth of its sales are made in the country.

Snyder also rejected accusations made by a handful of handset-makers at a U.S. Federal Trade Commission (FTC) hearing that they were threatened with their chip supplies being cut off if they do not pay the royalties that Qualcomm requests.

The FTC filed a lawsuit against Qualcomm two years ago, arguing it has a monopoly on modem chips and harmed competition by trying to maintain its position. Qualcomm’s “excessive” royalty rates have prevented rivals from entering the market, driven up the cost of phones and hurt consumers who ultimately have to pay more for smartphones, the FTC said.

According to Snyder, Qualcomm has never threatened to cut off chip supplies during negotiations. “In fact, … we never cut off the supply of chips to them during negotiations, and they knew that we wouldn’t do that because we’ve made assurances of supply,” he said.

He added that every licensee would like to pay fewer fees if it could, but customers have to pay to make use of Qualcomm’s IP — and Apple shouldn’t ask it to change its business model, just as Qualcomm wouldn’t tell Apple how much it should sell an iPhone for.

Snyder refused to comment on Krall’s comment that “there is no settlement at all on the horizon,” but stressed that Qualcomm wants to continue working with Apple.

“We would like to see a harmonious relationship with Apple, as we’ve had in the past, … as we have with many of our other licenses and chip customers. So that’s really the goal,” he said.