Despite China’s Slowdown, Lithium Producers Likely to Charge Ahead 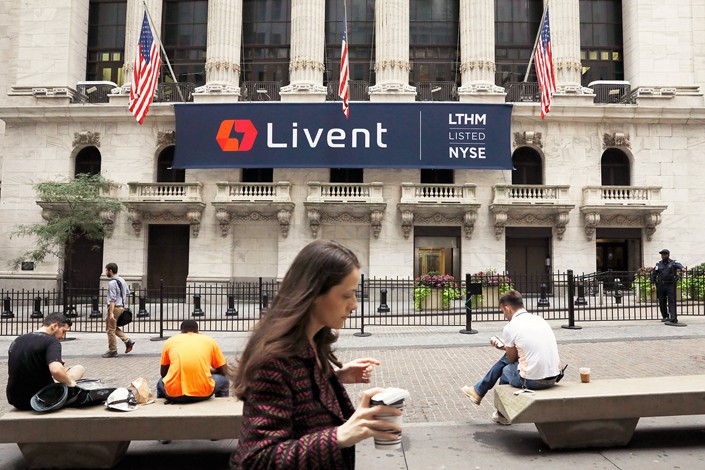 A Livent Corp. banner hangs in front of the New York Stock Exchange on Oct. 11 during the lithium producer’s initial public offering in the U.S. Photo: VCG

While a leading U.S. lithium producer blamed China’s slowing economy on its failure to secure contracts with customers, analysts remain upbeat about the industry’s prospects as China looks to forge ahead with becoming an electric-vehicle powerhouse.

Shares in the New York-listed Livent Corp. plunged by 8% in after-hours trading on Monday night after the company revealed it had struggled to secure contracts with customers in China, the biggest market for the key component in electric-vehicle batteries.

The company could boast increased profits in its 2018 results, but there was also bad news for its future outlook. The company’s CEO stated that “Chinese economic conditions weakened very late in 2018,” before adding that Chinese customers “were unwilling to make firm commitments for price and volume at levels that were acceptable to us.”

China’s recorded its lowest gross domestic product growth in 28 years last year and several producers of electric-vehicle components struggled after the government reduced generous state subsidies that led to a slew of companies to pile into the burgeoning electric-vehicle industry. Yet industry analysts remain upbeat about the prospects of lithium producers and the electric-vehicle makers who form their main customers.

Lithium miners have scrambled to develop and secure supplies of the metal in recent years in anticipation of a boom in the electric-vehicle industry, with Chinese companies in the vanguard. In December, Tianqi Lithium Corp. purchased a 23.77% share in Chilean miner Sociedad Quimica y Minera de Chile SA, tapping into the latter’s major expansion plans in its lithium-rich home nation. State-owned Jiangxi Ganfeng Lithium Co. Ltd. is also a major player in overseas expansion.

The bolstered supply has outpaced growth in demand, so far, leading to a drop in spot prices in China. Rising domestic supply, electric-vehicle subsidy changes, and destocking were behind prices for one of the most-traded forms of lithium falling from 160,000 yuan ($23,590) a ton at the start of 2018 to 77,500 yuan by the end of the year, said consultancy Wood Mackenzie in a recent note. This has posed difficulties for lithium producers still hoping to secure higher-priced contracts with consumers.

Yet lithium prices are expected to recover rapidly as the electric-vehicle industry matures, analysts said. Last year, China’s electric vehicle sales jumped 83% to 1.01 million units, according to data from the China Passenger Car Association. The government remains confident that this figure will double by 2020 to 2 million vehicles, Miao Wei, China’s minister of industry and information technology, said last month.

This year is also expected to see strong growth. “CRU believes China’s electric-vehicle sales will still increase by 62% in 2019 to 1.3 million units,” said Alice Yu, a senior consultant with CRU. “We still expect 2019 global lithium demand to grow, by 14% from 2018 levels,” she added, although lithium oversupply will continue to hamper prices in the short term.