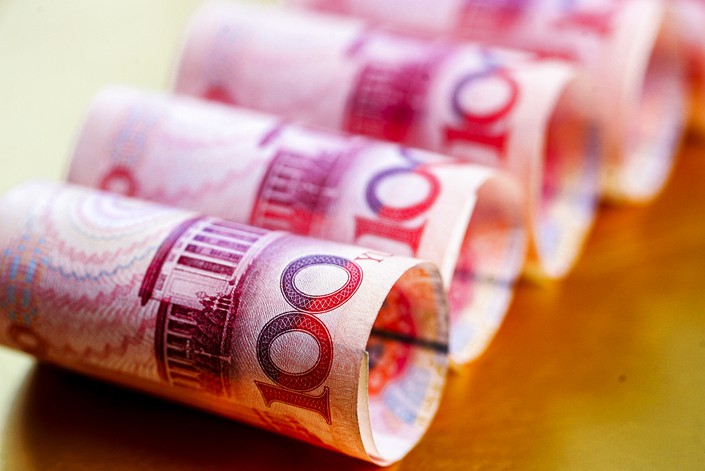 Net growth in China’ broad lending surged to a record high in January, as policymakers have urged financial institutions to boost lending to businesses amid a cooling economy.

China’s total social financing (TSF), a broad measure of credit and liquidity in the economy, grew by a net 4.64 trillion yuan ($684.93 billion) in January, much higher than a net increase of 1.59 trillion yuan the month before, data from the People’s Bank of China (link in Chinese) showed Friday.

The reading hit the highest level in available data going back to January 2002, and beat the median projection of 3.31 trillion yuan in a survey of economists by Bloomberg News.

A central bank official said the record growth in social financing doesn’t indicate that China is opening the credit floodgates as the new borrowing meets actual economic demands and remains at a stable level.

The faster credit growth in January is due to improving monetary transmission mechanism and seasonal factors, said Sun Guofeng, head of the People’s Bank of China’s monetary policy department at a press briefing Friday.

The central bank since late last year has adopted an array of measures such as allowing banks to issue perpetual bond and introducing various liquidity tools to bolster banking-system liquidity and direct more lending into the real economy, Sun said.

In January, banks made 3.23 trillion yuan in net new yuan loans, up 11.32% year-on-year, according to central bank data (link in Chinese). The reading also hit its highest since 2002, and exceeded a median estimate by the economists of 3 trillion yuan.

Multiple economists pointed out that net new lending data can vary greatly based on seasonal factors, especially at the start of the year.

“While we wouldn’t pin too much on a single month’s data, the latest pick-up in credit could be a sign that credit growth is starting to bottom out in response to monetary policy easing,” Julian Evans-Pritchard, an economist with research firm Capital Economics, said in a note.

Following the four targeted cuts to banks’ reserve requirement ratio last year, the central bank lowered the ratio by 100 basis points last month, resulting in a net injection of around 800 billion yuan into the financial system.

“A recovery in lending, if sustained in the coming months, would be consistent with our expectation for growth to stabilize in the second half of this year,” Evans-Pritchard said.

Yet some expressed concern.

“Our concern is that this policy cannot guarantee the efficient allocation of financial resources,” Raymond Yeung, chief economist for Greater China at ANZ Bank, said in a note. “China’s credit conditions seem to have improved, but the eventual growth impact will remain uncertain.”

China’s outstanding M2, a broader measure of the money supply that covers all cash in circulation plus deposits, grew 8.4% year-on-year at the end of January, up from 8.1% growth a month earlier, central bank data show.

In addition to monetary easing, Beijing has issued multiple measures to bolster the economy, such as cutting taxes and fees on businesses and individuals, as well as increasing infrastructure investment. Last year, the world’s second-largest economy grew 6.6% amid a debt-cutting campaign and a trade war with the U.S. The growth rate marks the slowest annual expansion in nearly three decades.

The cooling economy has stirred discussion that China will turn to more powerful moves to cut the benchmark interest rate to aid the economy, although the central bank has been hesitant to make such a move. China hasn’t changed its benchmark rates since 2015.

At the Friday briefing, the central bank’s Sun said the current easing policies and efforts to liberalize interest rates have led actual lending rates to decline since last year. The central bank should “focus more on the changes in actual interest rates,” and let policy rates be better transmitted into lending costs, Sun said in response to a question about the possibility of an interest rate cut.

Sun’s remark was interpreted as an implication of no urgency for an immediate interest rate cut, analysts said.

The central bank has taken a series of steps over the past month to reduce borrowing costs and release capital to a wider range of lenders. The strategy has been effective. The cost for banks to borrow from each other through seven-day repurchase agreements has been below the cost of the PBOC’s seven-day reverse repo for most of January.

Official data showed that the average lending rate to small and micro firms fell to 6.16% in January from 6.37% a year earlier.

Some analysts said current global financial market conditions offer a good opportunity for China to cut its benchmark rate as major economies are moving toward a similar easing direction.

In January, Zhu Hexin, a deputy central bank governor, said the bank will conduct research on future monetary policy measures based on the assessment of existing ones, when he was asked under what circumstances the monetary authority would cut its benchmark interest rates.