By Tanner Brown and Leng Cheng 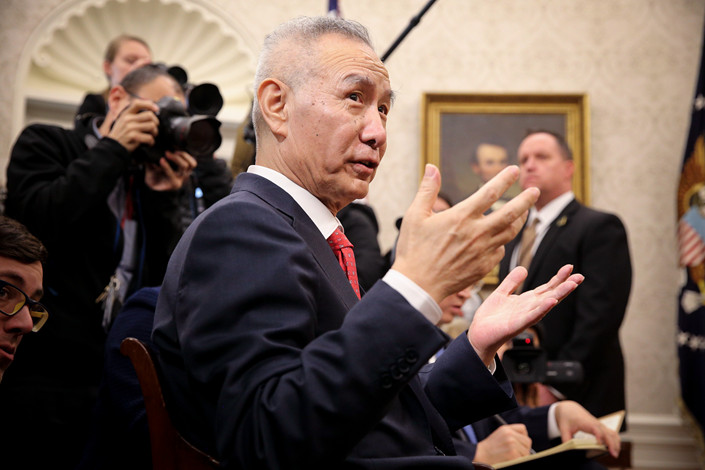 Chinese Vice Premier Liu He will visit Washington this week for another round of trade negotiations, as the two countries race against the clock to strike a deal to avert an escalation in their trade war before a March deadline falls.

Liu will hold talks with U.S. delegates led by Trade Representative Robert Lighthizer and Treasury Secretary Steven Mnuchin on Thursday and Friday, the Ministry of Commerce said in a statement (link in Chinese). The ministry did not elaborate on the topics that the two sides will discuss.

This will be Liu’s second trip to Washington in three weeks. He met with U.S. President Donald Trump at the end of January.

The White House said in a statement dated Monday that the two sides will continue talks on “needed structural changes in China” and discuss Beijing’s pledge to purchase a “substantial amount” of good and services from the U.S. in the Washington meeting.

The high-level meeting in Washington comes as the March 1 deadline of the 90-day negotiation looms, after which Trump says the U.S. will increase punitive tariffs on $200 billion of Chinese goods from 10% to 25%.

After talks in Beijing last week, President Xi Jinping hailed “important initial progress” achieved by Chinese and U.S. negotiators, though the White House kept a cautious tone saying much work remains. Xi also said he hoped the two sides to “keep up the good job” to work toward the reaching of a “mutually benefiting agreement” in Washington this week.

Moderating tension between the two countries on trade negotiations has partly paved the way for a rebound of Chinese mainland stocks this week, according to analysts from China Securities. The Shanghai Composite Index, the benchmark index of the mainland markets, closed up 2.7% on Monday, marking its biggest daily gain since Nov. 2.

Mainland stocks rose in morning trading Tuesday, with Shanghai up 0.25% by midday break, and the smaller, tech-heavy Shenzhen Component Index rising as much as 0.27% before falling back to a 0.04% gain by noon.