China, U.S. to Continue Trade Talks Next Week in Washington

By Charlotte Yang and Han Wei 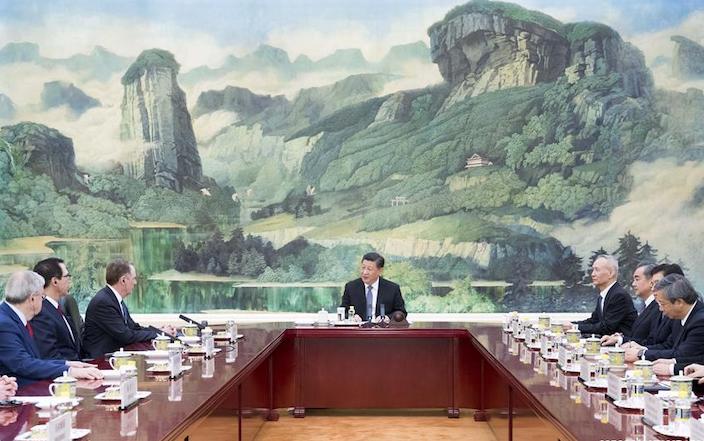 Chinese and U.S. officials made important progress in the most recent round of trade talks and will continue negotiations next week in Washington to seek a deal both sides could accept, Chinese President Xi Jinping said.

Xi made the remark as senior officials of the two countries wrapped up this week’s meeting in Beijing, trying to strike an accord before a March 1 deadline when the U.S. is set to raise tariffs on $200 billion of Chinese goods from 10% to 25%. The U.S. delegation, led by Trade Representative Robert Lighthizer and Treasury Secretary Steven Mnuchin, held two days of meetings with Chinese officials led by Vice Premier Liu He, Xi's top economic adviser.

The White House confirmed next week’s meeting in Washington and said this week’s discussions have “led to progress.” In a cautious tone, the White House said much work remains and both sides will continue working on all outstanding issues in advance of the March deadline.

“The consultations between the two sides achieved important step-by-step progress,” Xi said during the meeting, according to Xinhua. “Next week, both sides will meet again in Washington. I hope you will continue efforts to advance reaching a mutually beneficial, win-win agreement.”

Xi said cooperation is the best choice for the two countries and China is willing to take a "cooperative approach" to settle the disputes. Xi added that cooperation is principled.

“The two sides have reached primary consensus on major issues,” the newspaper said.

The two sides also discussed China’s purchases of U.S. goods and services intended to reduce America’s large and persistent trade deficit with China, according to the White House.

U.S. and Chinese officials agreed that any commitments will be stated in a Memoranda of Understanding between the two countries.

Mnuchin called his meetings with Chinese Vice Premier Liu He in Beijing “productive” on Friday.

“Productive meetings with China’s Vice Premier Liu He and @USTradeRep Amb. Lighthizer,” the treasury secretary wrote in a tweet, without elaborating.

In December, President Donald Trump and Xi agreed to a temporary truce during a meeting in Argentina. The U.S. promised not to impose any additional tariffs for 90 days as the two sides work toward a trade deal.

As the deadline approaches, Trump is said to be considering a 60-day extension to grant more time to negotiate, according to a Bloomberg report published Thursday citing unnamed sources. Trump said he was open to the possibility of an extension if the two sides are close to a deal that addresses structural changes to China’s economic policies, although he was not “inclined” to, according to Bloomberg.

“I believe we have seen expectations move from assuming China and the U.S. will resolve their differences during this 90-day negotiating period to assuming that talks would be a success if the U.S. doesn’t raise or apply more tariffs on March 1,” said Hannah Anderson, Global Market Strategist from J.P. Morgan Asset Management.

“While it is encouraging that the U.S. seems to be leaning toward giving policymakers more time to reach a settlement, the U.S. delegation appears to be holding firm on its view that greater Chinese purchases of U.S. goods and protection for U.S. intellectual property are meaningless without mechanisms to ensure China lives up to its promises,” Anderson said.

“China, understandably wary of being tied to too strict of a timeline, has resisted such demands in the past,” added Anderson. “This is not to say a deal is impossible, but the grand bargain the U.S. administration has been angling for remains a long way off.”

Since the start of the trade war, the Trump administration has been consistent in demanding that China address trade imbalances and make structural changes involving forced technology transfer, intellectual property protection and market entry barriers for foreign players.

“The United States’ approach to China is more aggressive than in the past,” the trade office said in its report. “Out of necessity, the United States is now using all available tools — including domestic trade remedies, bilateral negotiations, WTO litigation and strategic engagement with like-minded trading partners — to respond to the unique and very serious challenges presented by China.”

In response, the Chinese Ministry of Commerce said the U.S. accusations were based on its domestic laws rather than the rules of the WTO and went beyond the commitments China made when joining the WTO.