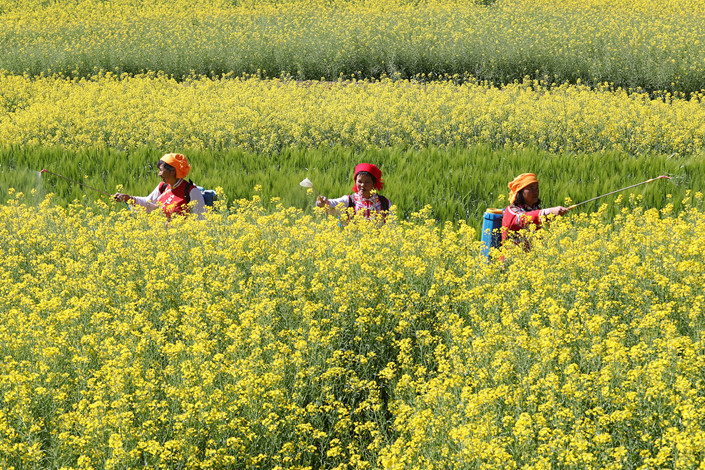 Farmers tend to their fields in Kunming, Yunnan province on Feb. 8. Photo: VCG

* The annual agricultural policy-setting “No. 1 central document” released by the State Council emphasised the need to eradicate poverty and to diversify imports — especially soybeans, for which China is reliant on the U.S.

* Although China wants to develop its own soybean production, imports will continue to be the mainstay of the country’s supply, the agriculture minister said. An analyst said China may be hoping that Belt and Road nations will also begin to grow more soybeans

In the face of downward pressure on the economy and “profound changes in the external environment,” policies on agriculture and rural areas are even more critical, said the “No. 1 central document,” released by the State Council on Tuesday evening.

The annual No. 1 document usually lays out policy priorities for farmers, the agricultural industry and rural areas.

China should diversify its agricultural imports and, in particular, plant more soybeans, said the document. China is the world’s biggest buyer of U.S. soybeans, which are mainly used to make animal feed and oil, but purchasing temporarily ground to a halt last year after China imposed punitive tariffs on imports in response to U.S. tariffs on its own goods. Soybean buying resumed in December after a temporary truce, which runs until March 1, was agreed between the two countries.

China will continue to import soybeans, and the market will decide where to buy them from, said Ministry of Agriculture and Rural Affairs Party Committee member Wu Hongyao, speaking at a press conference on Wednesday. China imports about 90% of its soybeans, with a third of these imports coming from the U.S.

Although China wants to develop its own soybean production, imports will continue to be the mainstay of the country’s supply, said Minister of Agriculture and Rural Affairs Han Changfu, at the same press conference. China and the U.S. are important partners in the soybean trade, he added.

“The ‘soybean revitalization’ plan named in the document, as well as similar moves for rapeseed, is clearly an attempt to rebalance away from heavy dependence on the U.S.,” said Even Pay, an analyst at China Policy, a Beijing-based advisory.

“The hope is that countries along the Belt and Road will start growing more soybeans, and China can do a better job of supplying itself in the meantime,” she said, referring to a Chinese plan to strengthen infrastructure and trade links between countries in Asia and Europe.

Poverty alleviation was another key goal laid out in the document, with a deadline for ending poverty completely within the country’s borders gets closer. China hopes to lift 10 million more people out of poverty in 2019, according to the official Xinhua News Agency. In the past 40 years, more than 800 million people in China were lifted out of extreme poverty as defined by the World Bank — an income of $1.90 or less per day.

Poverty alleviation targets, among other rural development goals, are “solemn promises” made by the Communist Party of China to the people, particularly farmers, the official People’s Daily said in a commentary on the document.

Meeting these targets is key to the quality of “socialist modernization,” as well as to maintaining the party’s credibility amongst the people, the commentary said.

Although China has dealt with its extreme poverty, it now needs to shift attention to its relative poverty, said Matteo Marchisio, who has led the United Nations’ International Fund for Agricultural Development agricultural lending work in China since 2014. China’s $1.90-per-day benchmark is lower than the internationally accepted poverty line for an upper-middle income country like China, he said.

Securing grain production, increasing farmers’ incomes, improving the rural living environment, and addressing shortcomings in rural public services and infrastructure were also named as policy priorities in the document, as in previous years.