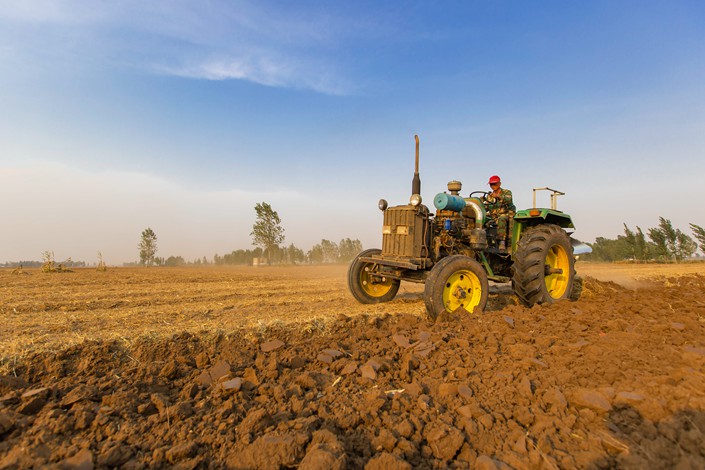 Policymakers are stepping up efforts to direct more funding to agriculture, farmers and rural areas as part of a five-year plan to revitalize China’s vast countryside and reduce poverty.

Rural banks are being urged to boost lending to aid economic development in agriculture and underprivileged areas, and encouraged to issue more special purpose bonds to fund projects in rural regions. The plans were outlined in a document released jointly on Monday by the People’s Bank of China (PBOC), the China Banking and Insurance Regulatory Commission (CBIRC), the China Securities Regulatory Commission (CSRC), the Ministry of Finance (MOF) and the Ministry of Agriculture.

Other measures pledged in the document involve help for qualified agriculture companies to list on the country’s stock exchanges, improving rural insurance and credit guarantee systems, and increased monetary policy support, including the use of differentiated reserve requirement ratios for banks that boost lending to rural areas.

The new guidelines mark the latest policy moves to implement the Rural Revitalization Strategy for 2018 to 2022 that was announced in early 2018 after being unveiled by President Xi Jinping at the 19th Communist Party Congress in October 2017.

The focus up to 2020 will be on poverty alleviation, the document said, adding that new financial resources should be tilted toward impoverished areas. Loans to poverty-stricken areas should increase at a higher rate than the average for the entire province or municipality where those areas are located, and relending in severely impoverished areas should be higher than in the year-earlier period. Relending allows commercial banks to use loans as collateral to borrow cheap funds from the central bank. The measures outlined in Monday’s document build on those already announced by financial regulators in a bid to encourage credit to flow to agriculture and rural areas.

In mid-January, for example, the CBIRC said it would tolerate nonperforming loan ratios of at least 5% on credit rural banks provide to farmers and small businesses. That compares with an average bad-debt ratio for the banking industry as a whole of 1.89% at the end of 2018, according to the latest CBIRC data.

The government has for several years made efforts to boost lending to rural areas, which policymakers say are underserved by financial institutions. Outstanding loans to the agriculture sector stood at 32.7 trillion yuan ($4.83 trillion) at the end of 2018, a 5.6% increase over the previous year. But the growth rate was 4.1 percentage points lower than in 2017, and 7.3 percentage points weaker than the overall increase in outstanding loans, according to Caixin calculations based on PBOC data.

To encourage banks to direct more capital into rural regions and the agriculture industry, the document said constraints are being dropped on the issuance of special purpose bonds whose proceeds are earmarked for agriculture and rural lending. Under regulations issued in 2013, commercial banks could issue special purpose bonds if they fulfilled certain criteria — they either had to demonstrate that the annual growth rate of their agriculture-related loans in the previous two years was higher than the average growth rate of total loans, or the value of agriculture-related loans in one year was higher than the previous year.

But take-up has been poor. Since 2013, only 13 rural commercial banks and four city commercial banks have issued such bonds and the total value has amounted to only 20 billion yuan, according to Caixin calculations based on data from state-owned clearing house China Central Depository & Clearing Co. Ltd.

The loosening of restrictions may encourage commercial banks to issue more bonds and boost agriculture-related lending, but it could also lead some banks to divert the proceeds for other purposes, a banking industry source who declined to be named told Caixin.

Policymakers are also creating an assessment mechanism to measure how well financial institutions are doing in providing services in rural regions and plan to publish the results on a regular basis, although the document did not give any specific details of targets.

Zeng Gang, director of banking research department at the Institute of Finance and Banking, said the criteria could be based on a document released in January which listed some quantitative measurements, such as the ratio of a bank’s agriculture- and small business-related loans to its total loans and credit issued to rural residents.

Ding Yu, a micro-credit specialist with the New York-based United Nations Capital Development Fund, cautioned that while the latest policies are conducive to directing more financial resources to rural areas, they also increase government interference and regulatory pressure. They could also lead some institutions to game the system and cheat to meet their targets, he said.