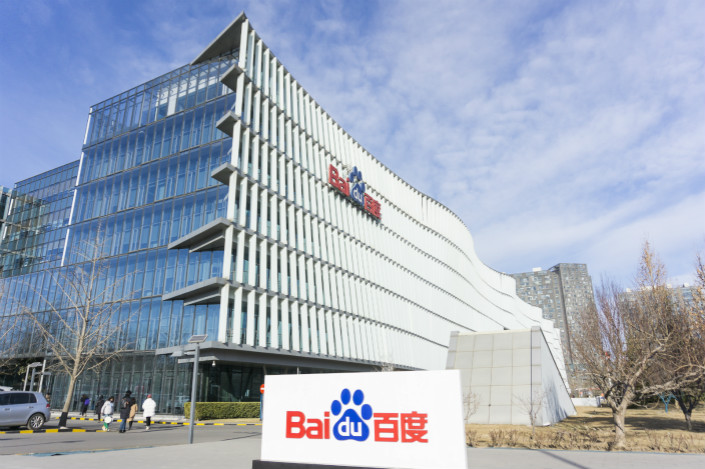 Internet giant Baidu Inc.’s profit plunged at the end of last year as it spent heavily on new products and services to offset slowing growth from its core search business, the company reported Thursday.

Continuing losses from the online video unit iQiyi created much of the drag on Baidu’s bottom line, even as iQiyi posted strong revenue growth. Baidu shares were up 3.7% in after-hours trading shortly after the results came out, while separately listed iQiyi shares were down nearly 1%.

“The diversification of Baidu's business from mobile internet into the smart home, smart transportation, cloud and autonomous driving markets will require heavy investments,” said Baidu CFO Herman Yu. “Nevertheless, these investments taken together give Baidu a balanced portfolio for short-term, medium-term and long-term returns, and we hope to see these investments bear fruit and accelerate Baidu’s revenue growth in coming years.”

Baidu revenue rose 22% in the fourth quarter to 27.2 billion yuan ($4 billion), according to the most recent quarterly report released after markets closed Thursday. But total net revenue from the core business, mostly Baidu’s leading search engine, grew at a much slower 14%. Operating income tumbled 77%, while net profit fell 50% to 2.1 billion yuan.

Baidu has come under fire repeatedly over the past two years as critics allege it uses a near-monopoly on China’s search market to unfairly promote its own products and services as well as those of its advertisers. Most recently, an online post by an ex-journalist that went viral in January accused Baidu of no longer being a true search engine and said it has instead become a place where people can search for the company’s own content.

Leading global search engine Google had developed and was testing a search engine that could comply with China’s tough laws requiring companies to self-police for sensitive content. But Google put that plan on hold following a wave of criticism, both internal and external, after word of the pilot program leaked out.

Part of Baidu’s profit woes stem from its large stake in iQiyi, which is growing quickly but is still losing big money as it attempts to build up its content offerings. In the quarterly report, Baidu said iQiyi’s subscriber base more than doubled last year to 87.4 million, while the company’s fourth-quarter revenue jumped 55% to 7 billion yuan. But iQiyi’s net loss also widened to 3.5 billion yuan for the quarter, compared with a deficit of 612 million yuan a year earlier.