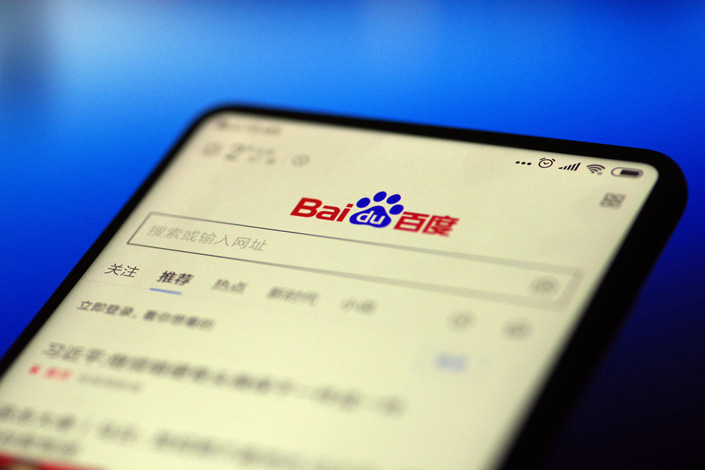 * As growth in its key revenue source — advertising — slows, the company is under pressure to find a new growth engine, but its efforts are yet to bear fruit

The country’s internet population is increasingly migrating to mobile devices from desktop computers and Baidu hasn’t been able to keep pace with the change. The surge in popularity of apps like Bytedance Ltd.’s news aggregator Toutiao has increasingly encroached on its core search business and the advertising revenue it generates.

Baidu’s problems came under the spotlight last week when a controversial article headlined Baidu As a Search Engine Is Dead went viral shortly after being published on Tencent Holdings Ltd.’s popular social media app WeChat. It’s the latest bout of unwelcome media exposure for the company, which has already been upbraided for misleading medical advertising.

The author complained that more than half of the results from Baidu’s own search engine link to poor quality content on its other platforms including Baijiahao, a blog-style service launched in 2016 to compete with apps like Toutiao. Toutiao has been a pioneer of the so-called in-feed advertising model, which allows advertisers reach targeted audiences through social media and apps.

Caixin’s own research backs up the author’s findings. In a search for “China Men's National Football Team,” on Baidu’s search engine, seven of the top 10 results on the first page were links to its own internal products, four of which were from Baijiahao. A search for “traffic jams” got almost the same result while inputting Trump as a keyword showed only two first-page results linking to external websites.

Baidu has defended its search engine, claiming that fewer than 10% of the results of Baidu searches direct users to its Baijiahao platform, although it did not reveal the percentage of Baijiahao’s content on the first page of the results.

Baijiahao is Baidu’s version of similar collaborative user-generated media platforms, known as “we media,” where independent writers, bloggers, and journalists, and media outlets can post articles and earn money through advertising placed alongside their pieces. The most popular platform is WeChat’s official account, which has grown rapidly since its launch in 2012 as it has leveraged the billion-strong user base of the social media app.

Analysts say Baidu has little alternative but to focus on promoting its own services in the mobile internet era as users can bypass its platform altogether by using the internal search services of specialized apps covering a variety of topics such as consumption, movies and music.

Rival internet platforms are also blocking Baidu — and other competitors — from accessing their own sites and data which means its algorithms can’t capture them and link to them in search results. Baidu can’t for example search the public accounts of social media platform WeChat.

Baidu says Baijiahao is aimed at improving user experience and solving problems such as slow-loading sites and page layout on mobile devices. It claims the service has attracted about 1.9 million writers since its launch in 2016. In comparison WeChat has around 20 million public accounts which include writers and corporate entities at the end of 2017, according to company data.

Baidu’s revenue from online marketing amounted to 22.5 billion yuan ($3.35 billion) in the third quarter, making up 80% of its total revenue, according to its latest earnings report. But the rate of growth slowed to 18% from 25% a year earlier and the revenue per online marketing customer rose at a slower pace — 12% compared with a 16% gain in the previous quarter. Growth in the number of active advertisers on its platform also slowed to 7% from 9%, totaling 522,000.

As growth momentum slows, Baidu is under increasing pressure to develop a killer product or app that will kick-start its fortunes. Although it is seeking to develop two apps for mobile users — Baidu Maps and Mobile Baidu — both face significant challenges in penetrating the market and in monetizing their offerings. The company is also investing heavily in autonomous cars and artificial intelligence, as well as in offline advertising businesses, but has yet to see a significant uplift to its revenue and earnings from these ventures.