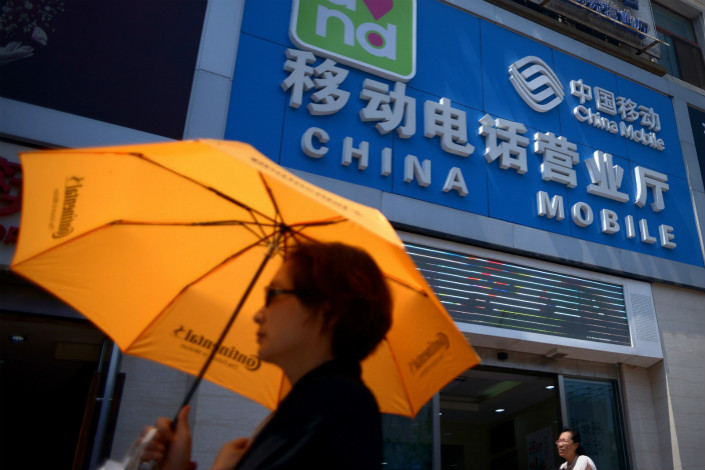 Such moves are common at major state-run enterprises in China, with top officials often switching between companies and even industry regulators as part of Beijing’s strategy to regularly move around key executives. Many of the officials come from industry backgrounds, but a growing number have also added management degrees to their resumes.

Jie is one such person. He will assume the chairman’s position at China Mobile Communications Group Co. Ltd. following his resignation from the same position at China Telecommunications Corp., according to separate statements Monday from the two companies’ Hong Kong-listed listed units. China Mobile concurrently announced the departure of its Chairman Shang Bing , who is retiring because of age. China Telecom did not say who would succeed Yang.

China is the world’s largest telecom market with more than 1.5 billion mobile subscribers, nearly all of them divided among China Mobile, China Telecom and the industry’s third player, China Unicom. China Mobile is the dominant player with about 60% of the market, and the two smaller companies roughly split the remainder.

Yang, who turns 56 this year, graduated from the Beijing University of Posts and Telecommunications with a major in wireless engineering. He later received a master’s degree in communications information management from BI Norwegian Business School. He became a vice president at China Telecom in 2006 and was named the group’s youngest president in 2011.

He became chairman in 2015 after the previous Chairman Chang Xiaobing was removed in Beijing’s ongoing anti-corruption campaign. Chang’s removal came just four months after he switched to China Telecom from his previous position as chairman of Unicom. He was later tried and sentenced to six years in prison and fined 500,000 yuan ($74,500).

Industry watchers said that during his three years at the helm of China Telecom, Yang had a tacit understanding with Unicom’s chairman not to compete too fiercely with each and instead focused efforts on the larger China Mobile.

Yang’s move has also reignited recent market talk that Beijing might be considering a merger between Unicom and China Telecom to better compete with China Mobile. An indicator may be whether the government moves quickly to name a new China Telecom head or leaves the post vacant, said Jefferies analyst Edison Lee. In addition to his title as chairman, Yang was also CEO of China Telecom’s Hong Kong-listed unit.

“The longer China Telecom remains without a CEO, the more the market may start imagining again a potential China Telecom-China Unicom merger,” Lee wrote. “For now, we believe even if there is M&A it will only be a 2020 event.”