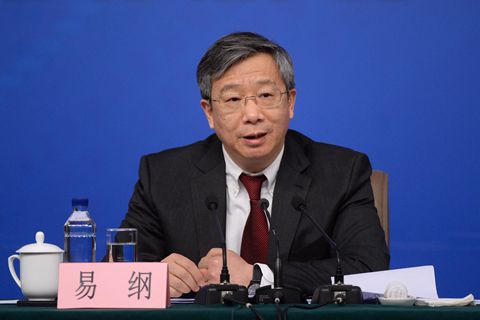 There is still room for China to cut banks’ reserve requirement ratio (RRR), but the room is much smaller than in previous years, central bank Governor Yi Gang said Sunday.

Yi’s comments come as market participants have high hopes for more monetary easing steps this year when the world’s second-largest economy is still plagued by sluggish growth amid a trade war with the U.S.

When considering potential RRR cuts, the People’s Bank of China will take optimal resource allocation and risk prevention into account, Yi said at a press briefing (link in Chinese) during the country’s annual legislative session.

Since last year, the monetary authority has cut the RRR — the amount of reserves that banks are required to hold at the central bank — five times by 3.5 percentage points to prevent the economy from worsening further. China’s economy grew 6.6% last year, the slowest annual expansion in nearly three decades.

Li said that China will continue to pursue a “prudent” monetary policy this year, omitting the word “neutral” — which he had mentioned in last year’s work report — raising expectations of a more relaxed stance.

Credit data seem to support such expectations. The net increase in January’s total social financing (TSF), a broad measure of credit and liquidity in the economy, hit a record high in available data going back to January 2002, although the rise in February was much more subdued, according to central bank data.

It’s more concise not mentioning the word “neutral,” but the connotation of a prudent monetary policy remains unchanged, Yi said.

One should not look at only one or two months’ data, but rather at long-term trends, including the weighted average and the moving average, Yi said.

The goal of monetary policy is to provide countercyclical adjustment, which means monetary supply should be neither too tight nor too loose, Yi said. China aims to keep growth in TSF and M2, a broader measure of the money supply that covers all cash in circulation plus deposits, roughly in line with nominal gross domestic product growth this year, he said. In addition, the central bank will optimize the structure of monetary policy to further support private and small businesses, and focus on the domestic economic situation while taking the international environment into account when setting monetary policy, he said.

China and the U.S. reached consensus on many key currency-related issues during the recent trade talks in late February, Yi said. The two sides’ discussions involved how to respect each other’s autonomy in determining domestic monetary policy, promising improved data transparency and pledging to avoid competitive devaluations, he said.