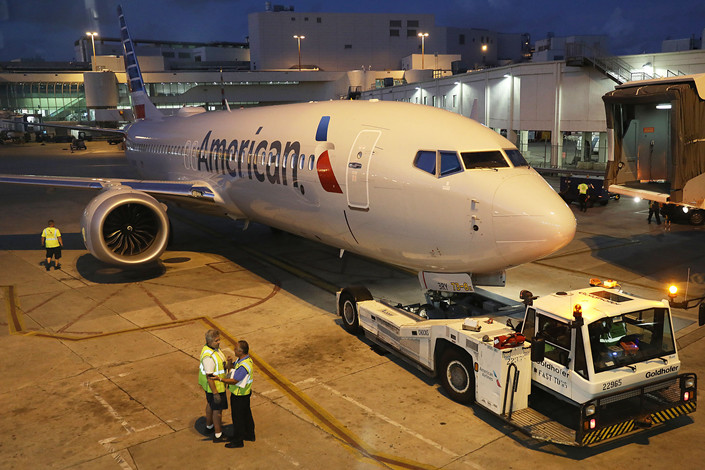 A grounded American Airlines Boeing 737 Max 8 gets towed at Miami International Airport on Wednesday in the U.S. Photo: VCG

The deadly crash of a Boeing 737 Max 8 aircraft Sunday could cause ripples throughout the aviation credit sector for 2019, Fitch Ratings said.

The international credit ratings agency is most concerned about a scenario in which a systemic issue with the aircraft could lead to “lengthy groundings, material delivery delays, significant order cancelations and negative public sentiment toward the Max,” it said in a statement Wednesday.

The remark came after a Boeing 737 Max 8 operated by Ethiopian Airlines crashed minutes after taking off Sunday, killing more than 150 people. In October, the same model of aircraft operated by Lion Air crashed into the sea near Indonesia, killing all 189 passengers on board.

The two incidents, which happened just five months apart, prompted countries across the globe, including China, the U.S., Canada, India and all of Europe, to ground either the Max 8 or all Max models.

“If there is a correlation between the causes of the two recent crashes, we expect the situation to worsen, and lengthy groundings and delivery delays to ensue,” Fitch said. “Similarities between the Lion Air and Ethiopian Airlines accidents would possibly indicate the presence of a design flaw that would need to be addressed.”

However, it added that Boeing’s credit profile is not immediately affected by the two crashes because of the company’s substantial liquidity, financial flexibility, low leverage, market position and revenue diversification.

China said Wednesday it had no timetable for resuming flights of the Boeing 737 Max 8. Once safety issues are resolved, authorities will contact the U.S. Federal Aviation Administration (FAA) and Boeing, then inform domestic airlines that they can resume using the aircraft for commercial flights, Ministry of Foreign Affairs spokesperson Lu Kang said, citing a notice released by the Civil Aviation Administration of China (CAAC).

On Monday, CAAC ordered airlines across China to ground all Boeing 737 Max 8 aircraft. China Eastern Airlines, one of the China’s largest airlines, wrote to Boeing requesting confirmation that no Boeing 737 Max 8 incidents were caused by design flaws.

Chinese airlines operate 96 out of the 350 Boeing 737 Max 8 models that the company has delivered worldwide. The country was the first to suspend the aircraft’s operation.

Boeing said Wednesday in a statement that it continues to have full confidence in the safety of the 737 Max. However, it recommended the temporary suspension of operations of the entire global fleet of 737 Max aircraft to the FAA, “out of an abundance of caution and in order to reassure the flying public of the aircraft’s safety.”

While the Max makes up a small percentage of the global airplane fleet, it is a key part of many airlines’ growth and cost-reduction plans, Fitch said.

The Max is a key project for Boeing, which Fitch estimates will make up approximately 90% of the company’s estimated 737 deliveries this year.