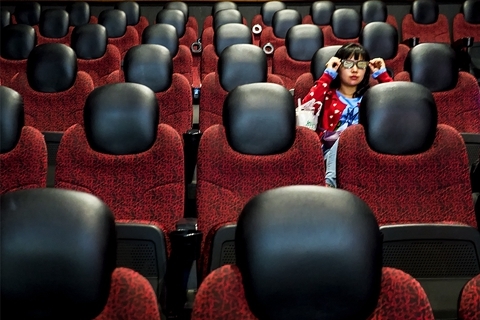 At least two theater operators have received new cinema licenses following a years-long hiatus, hinting at possible consolidation ahead for the overcrowded industry.

Bona Film and Zhong Ying Xing Da both received licenses in December, company representatives confirmed to Caixin, shortly after the film regulator issued a new opinion on how to speed up the sector’s prosperous development. Some observers interpreted the regulator’s move to create strict criteria for new licenses as aiming to promote consolidation after years of explosive growth.

China had more than 58,000 cinema screens at the end of last year, up more than 40% from just two years earlier, according to EntGroup.

The nation is the world’s second-largest movie market, behind only North America, feeding off a growing middle class with a taste for high-quality entertainment. But the country’s box office growth slowed sharply to 9% last year, less than half the rate in 2017, leaving a large number of theaters idle because of overbuilding.

In the first 10 months of 2018, nearly 300 cinemas closed in China, according to Top Consulting. And in August, September and October last year, 2,100 theaters – about a fifth of the national total – had no recorded box office revenue.

Strict requirements in the new guidelines, including minimum thresholds for box office receipts, mean that more than half of the country’s current movie theater operators can’t qualify for new licenses. Of 48 operators at the end of 2018, 26 had less than 500 million yuan ($74.5 million) in annual box office revenue.

Some analysts said the new licenses could allow current operators like Bona to consolidate operations under a single brand. Bona operates about 100 theaters, two-thirds of them self-developed and the other third acquired, with plans to open 25 more this year. The company is also engaged in film production and distribution.

Bona was previously listed in New York but privatized in 2016 amid a broader wave of delistings by Chinese companies that thought they were undervalued by American investors. It is now preparing to relist on one of China’s domestic stock markets. Bona is pulling together its production, distribution and cinema operation permits and licenses to make itself into a full-service company.

“In this way, Bona will have a good story to tell to the markets,” said one observer from the real estate investment part of the industry. “It will be unified from the perspective of brand and operations, which should help its listing.”

Others said benefits of the new licenses would be less obvious for operators that aren’t planning to list.

One of the most hurting players is SMI Holdings Group Ltd., which operates the Stellar Cinemas chain that was China’s fourth-largest at the end of 2017. After months of speculation about financial difficulties, the company was forced to come clean on debts of at least $60 million in unpaid wages and rent, and to close 140 of its 320 cinemas late last year.

Another operator, Perfect World, was forced to close some of its theaters last year after coming under financial pressure.