Brokerages Told to Watch Out for Shady Trading Practices 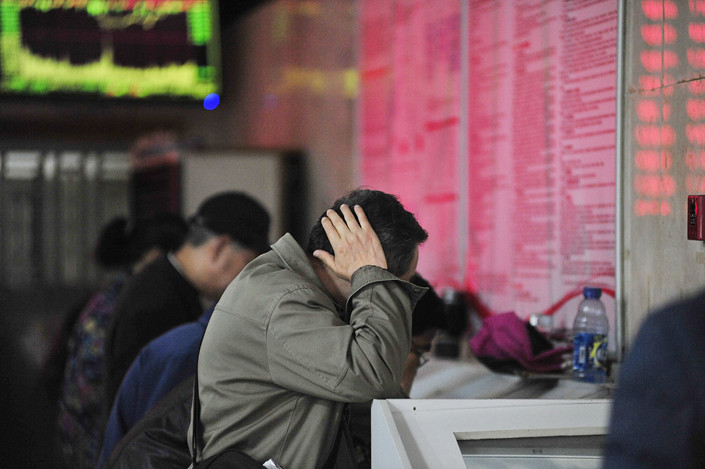 A total of 48 "abnormal transactions" were reported on the two bourses last week, up from 28 in the trading week that ended on March 8. Photo: VCG

* Since the notice was issued, the number of abnormal transactions published by the stock exchanges has soared

(Beijing) — The Shanghai and Shenzhen stock exchanges have ordered brokerages to keep a closer eye on their customers for any shady trading practices, Caixin has learned.

The orders highlight official concerns over a bubble possibly forming in the mainland’s stock market, which has soared 24% this year on the back of relaxed liquidity conditions, progress in the China-U.S. trade negotiations, and global index compiler MSCI’s announcement that it will raise the weighting of A-shares in its indexes.

In early March, the stock exchanges issued a circular that asked member institutions to step up monitoring of what they call “abnormal transactions,” Caixin has learned.

The exchanges have required brokerages to be vigilant against four types of illicit activity. The first is spoofing, which is when a trader places a large buy or sell order with no intention of executing it in order to create a phony impression about a stock. The second, pump-and-dump schemes, involves making false or misleading statements about a stock one owns to inflate its value in order to sell it later at a higher price.

The exchanges also warned brokerages to be on the lookout for customers that place large orders at a price that will send the stock to its daily gain or loss limit in order to halt trading, as well as customers that trade shares among their own accounts or accounts controlled by others they might be colluding with. They also provided specific standards for securities firms to identify whether certain dealings amount to any of the aforementioned misconduct.

The securities firms should also step in once they identify an abnormal transaction and report serious cases to the stock exchanges in a timely manner, according to the notice. However, the stock exchanges also stressed that securities companies should respect their customers’ freedom to trade. They recommended that the brokerages prudently manage trading activities in line with regulations.

Since the notice was issued, the number of abnormal transactions published by the Shanghai and Shenzhen bourses has soared, according to stock exchange figures. A total of 48 cases were reported last week, up from 28 in the trading week that ended on March 8. By comparison, there were around eight abnormal transactions reported on average each week over the first seven trading weeks of this year.

Brokerages can reject an investor’s trade request or terminate their contract with a customer if they find abnormal transactions that either violate regulations or laws or severely disrupt market. They should report to the bourse if they are unable to stop the transactions, according to rules (link in Chinese) published by the Shanghai Stock Exchange (SSE). Securities firms will be subject to the SSE’s regulatory measures or disciplinary punishment if they fail to perform the so-called customer management duties.

When abnormal transactions are identified, the SSE can suspend trading of the stock, issue a verbal or written warning to an investor via his broker, or impose restrictions on the investor’s brokerage accounts, according to another regulation the stock exchange released.

Another move to dampen risky bets on stocks, securities regulators recently gathered brokerages to urge them to tighten supervision on over-the-counter leveraged loans. The informal lending, which allows investors to amplify the size of their stock investments with borrowed money, and as such exposes them to greater potential gains as well as losses, fueled the stock market bubble and crash in 2015.