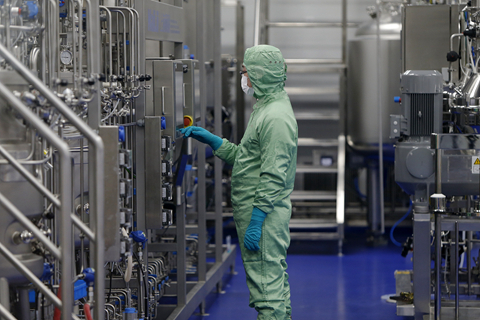 A facility at CanSino, whose shares will make their Hong Kong trading debut next week. Photo: VCG

CanSino made headlines in 2017 when China’s regulator approved its vaccine for the deadly Ebola virus that ravaged parts of Western Africa in 2014 and 2015. That vaccine was co-developed with the Chinese military and was one of a number of similar products being created globally to fight the disease.

But analysts said CanSino’s Ebola vaccine will have a limited market and most of its other products are still in early development stages. Faced with that reality, the company is likely to continue posting losses for at least the next few years, wrote Zhongtai Securities in a research note, giving the company a “neutral” rating.

CanSino could raise as much as HK$1.25 billion ($160 million) in the offering, whose first public filings date back to last July. The initial filings came just months after Hong Kong relaxed a rule that had required all such companies to be profitable before listing. It made that move to attract startups from the hot biotech sector, whose products can be extremely lucrative but often take years to commercialize.

CanSino is planning to sell 57.25 million shares in a price range of HK$21 to HK$22 each. The company started taking orders for the stock Monday, and trading will begin March 28.

Three cornerstone investors have committed to buying a big portion of the IPO shares. Biotech investor LAV Amber Ltd. has agreed to buy 3.57 million shares; British health care-oriented fund OrbiMed is buying $25 million worth; and a fund tied to the Tianjin government has agreed to buy $10 million.

Founded in 2009, CanSino posted a net loss of 139 million yuan ($20.8 million) in 2018, with research and development costs, including clinical trial costs, of 121 million yuan for the year, according to its prospectus. Following the IPO the company should be valued between HK$4.6 billion and HK$4.8 billion, which is relatively low compared with its peers, according to Zhongtai Securities. CanSino was the eighth biotech business without any significant revenue to apply for a listing after the Hong Kong rule change. Many of the earliest listings performed poorly last year as investors worried about the companies’ futures and China’s broader market entered bear territory.

But two of the latest listings have fared much better. Shares of CStone Pharmaceuticals have risen nearly 40% since their listing in February, while Shanghai Junshi Biosciences Co. Ltd. has gained nearly 60% since its December trading debut, amid a broader rally for Chinese stocks since the start of this year.