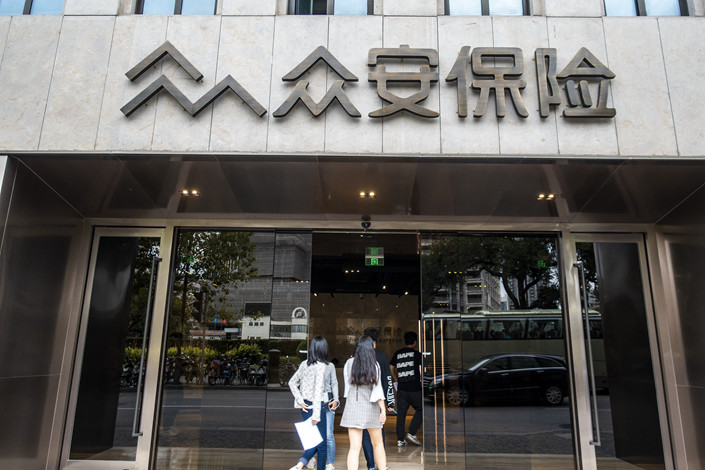 Star online insurer ZhongAn has reported its second annual net loss due to stock investment losses, a decline in its insurance business and the rising cost of technology research and development (R&D).

ZhongAn Online P & C Insurance Co. Ltd. reported a net loss of 1.74 billion yuan ($259.08 million) for 2018, widening from a 996 million yuan loss the previous year, according to the company’s 2018 annual report filed to Hong Kong Stock Exchange on Tuesday. The company, which is backed by Alibaba Group Holding Ltd.’s founder Jack Ma and Tencent Holdings Ltd.’s Pony Ma, took a loss despite its premium revenue surging 89% from the previous year to 11.26 billion yuan.

The stock price of the online-only insurer, which went public in Hong Kong in September 2017, has been falling since late last year as investors have grown increasingly skeptical about its touted advantages over traditional insurers. As of Tuesday, the company’s stock was trading about 57% below its initial public offering (IPO) price and was down 73.8% from its peak of HK$97.8 ($12.45) in October.

Some institutional investors, including SAIF Partners, China International Capital Corp. Ltd. and CDH Investments, have all sold some of their holdings in ZhongAn since their lock-up periods expired. For instance, SAIF Partners cut its stake in ZhongAn from 8.6% to 4.82% of the insurer’s total shares, and CDH Investments reduced its stake from 12.65% of the insurer’s shares to 3.08%, according to data from the Hong Kong Stock Exchange.

Some institutional investors have told Caixin that they have turned bearish on ZhongAn for two main reasons. One is that the company made a lot of promises about how it would be able to generate profits in ways that its competitors couldn’t. So far, those claims have yet to come to fruition, the sources said. The other reason is that they believe ZhongAn expanded too quickly into businesses unrelated to property and casualty insurance, such as online microlending.

Motor insurance, credit guarantee insurance, and health insurance were the company’s three fastest growing online insurance businesses in 2018, with premium revenue from the three rising 1,371.1%, 179.9% and 152% year-on-year, respectively. This growth structure is in line with traditional property and casualty insurers.

Exploring a new engine for growth, ZhongAn started looking offshore in the second half of 2018, aiming to boost overseas sales of both insurance policies and its own proprietary software that lets insurers sell their products online.

Those businesses, however, ended up only generating red ink in 2018. ZhongAn’s technology export business suffered a net loss of 453.1 million yuan on 112.4 million yuan in revenue, according to the company’s annual report.

The company explained that its technology export business took a loss because it was still investing in R&D and market exploration. It said it would continue to step up investment in “developing artificial intelligence, blockchain and a commercial insurance technology platform that connects with the data systems of hospitals.”

Regarding the insurer’s earnings for 2018, Morgan Stanley, the investment bank that led the cornerstone investment in ZhongAn’s Hong Kong IPO, raised its investment rating for the insurer to “buy,” citing improvement of its core solvency ratio. Yet Japan’s Nomura Securities lowered its estimate for ZhongAn’s annual premium growth by 10 percentage points to 50%.