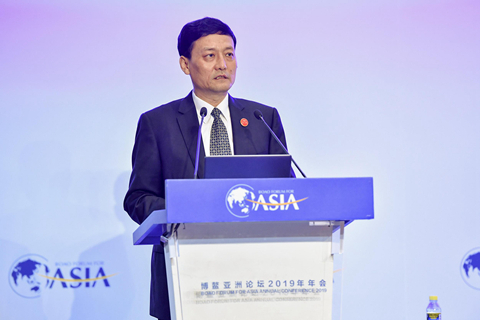 China has advanced mixed-ownership reform since 2013, aiming to bring private-sector investment and management into state-backed companies to shake up stodgy sectors. Three groups of 50 state companies have since been selected to test the reforms, and dozens of them, including China Unicom and China Railway Corp., have unveiled plans to invite private investors.

The latest list of reform candidates will involve more than 100 state-owned enterprises (SOEs), Xiao said earlier this month at the national legislative meeting.

Companies with state backing still constitute a significant share of the world’s second-largest economy. Data from the finance ministry showed that revenue generated by companies owned or controlled by the state totaled 58.75 trillion yuan ($8.7 trillion) in 2018, contributing 65% of China’s gross domestic product.

While the large SOEs that SASAC oversees generated record profits amounting to a combined 1.2 trillion yuan ($177.7 billion) last year, they receive heavy government subsidies and are less efficient than private-sector peers, which have less financial support when business turns sour. The SOEs’ returns on capital tend to be half those expected of private enterprises.

Xiao said SASAC has actively encouraged state companies to engage in reforms and supports all types of investors — private and foreign — to participate in the mixed-ownership reform.

The mixed-ownership project will lead to breakthroughs for China’s long-stalled SOE reforms and should be further expanded, Xiao said, adding that such reforms should bring mutual benefits and long-term growth to both state and private players.

Despite Beijing’s pressure, doubts over the mixed-ownership reform linger as private investors have remained skeptical over how much say they could get in the state companies where they invest and whether the state enterprises are willing to compete fairly in the market.

“The biggest concern of private companies is the degree of control and influence they will have over their state-sector partners’ decision-making,” said Wang Huisheng, chairman of the State Development & Investment Corp. at the same forum.